Why and how to trade running shoes for snowshoes this winter 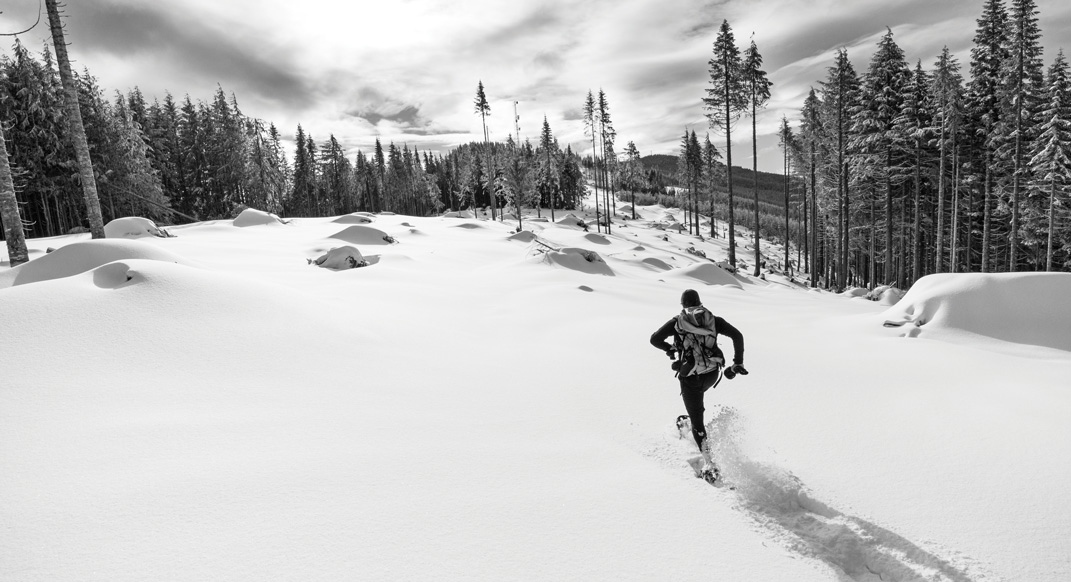 We get it: winter running can be a challenge, with its icy trails and cold temperatures. But there’s a growing cadre of runners taking advantage of the chilly months as an opportunity to get serious about a particularly underrated winter pastime: snowshoeing. Snowshoe running—and racing—may translate to better, stronger running.

Snowshoeing enables you to continue enjoying your favorite trails even when they are covered in snow, and opens the door to exploring off-trail. It beats staring at the screen of the treadmill. Plus: snowshoeing has less impact on joints, because of the softer surface.

Nick Scalfone, 32, of Bend, Oregon, began his career as “your average cross-country and road runner” in high school and college. He went on his first snowshoe run in 2010 and it quickly became his favorite sport. He was third at the 2017 U.S. Snowshoe National Championship back in March.

“I look forward to it the whole year,” Scalfone says. “It’s the best of everything for training in the winter.”

Prepare for soreness in muscles you didn’t even know you had. Scalfone calls it the hardest workout there is, because it uses “whole-body mechanics.”

“The first time I do a snowshoe run each season, it’s not just my legs that are sore,” Scalfone says. “It’s my abs, back and arms. Because it requires more strength to combat the extra resistance, your heart rate is a lot higher and your body does a lot more work.”

Because of the added resistance and cold, you won’t need to put in as much mileage. Scalfone does weekly tempos of around 10K, and long runs that range from 90 minutes to two hours. Even power hiking on snowshoes out in the backcountry makes for an excellent workout.

“I tend to accumulate many dark hours lit by moonlight and headlamp,” she says. “It’s peaceful, and it’s darn hard.” She saves the speed for track sessions and the occasional tempo.

It’s important to choose the right pair of snowshoes. Some are meant for general hiking, some for powder and others for running and racing. Joe Gray, a nine-time member of the U.S. Mountain Running team and winner of this year’s World Snowshoe Invitational, recommends trying a few snowshoes based on what your goals are.

Snowshoe races are regionally based, depending on where the snow is best.

“The field is typically faster than you’d expect,” says Flynn. “There’s strategy involved just like any cross-country race, and most events involve groomed trail, singletrack and a non-groomed section.”