"Nordic" skiing can improve your fitness, give your legs a break and make you a better all-around athlete and runner 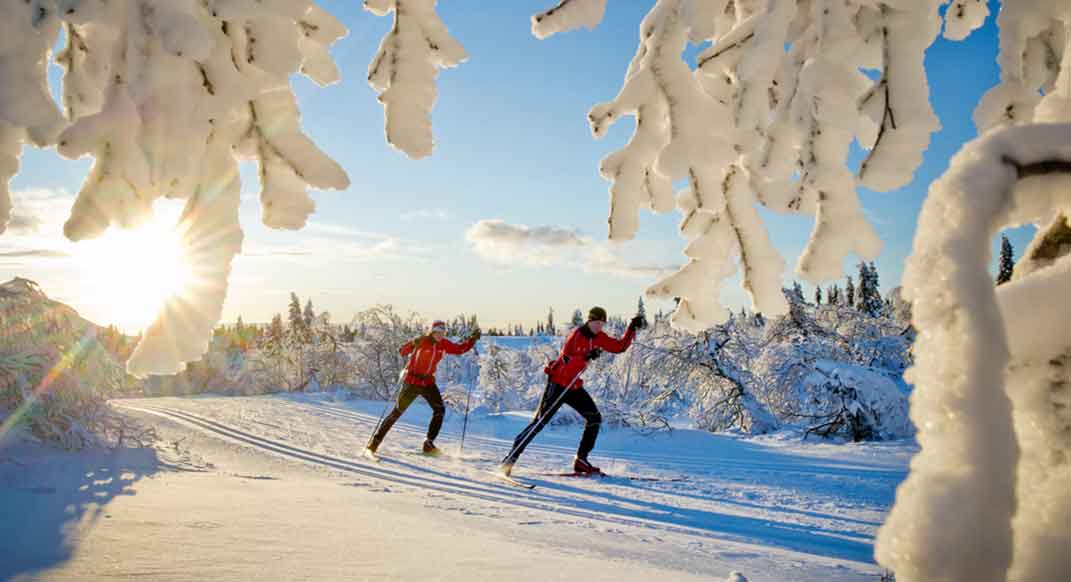 Two years ago, hunkered down in the tundra of a Minneapolis winter, I decided to try what so many of my friends and training partners already did: strap some extremely skinny sticks, pick up some ungainly long poles and take a stab at skate skiing.

I had never cross-country skied, despite an extensive background in alpine. But, I reasoned that I was fit enough to pick it up fairly quickly.

That couldn’t have felt farther from the truth. My first time out, I was doubled over every 10 minutes in oxygen debt; my hips, glutes and adductors quickly went from on-fire to wobbly to completely numb. Against the odds, it seemed, I had found something that was harder than trail running.

According to Scott Johnston, a coach with Uphill Athlete, all these things were making me a far better athlete and, in turn, a better runner. Johnson knows his stuff; he works with professional ultrarunners and ski mountaineers, coached four cross-country skiers who made the 2014 Olympics and has two going this year. We chatted with him to get the basics on cross-country skiing, how it benefits runners and why it just might be the best form of winter cross training out there.

Cross training isn’t just a welcome break for your legs from the pounding of running; the right kind can actually help you address weaknesses and improve your performance as a runner when spring rolls back around.

Because skiing uses poles and requires the use of all four limbs, your body’s oxygen uptake is significantly higher than when running. This means even the most fit runner could see an improvement in his or her aerobic capacity, says Johnston.

“It’s true when they say cross-country skiers have the highest VO  max because, very simply, you’re using your entire body,” he says. “As a runner, there’s no disadvantage to cardiovascular gains.”

Additionally, the balance component required for both classic and skate skiing can strengthen key core muscles and make you more injury resistant as a runner.

“Your [gluteus medius—the muscles high on the outside of your gluteus complex] gets a lot more work in the single-legged stance, so they get a lot more work skiing than running,” says Johnston. “But when you’re running, you still need them to be strong and help track your knee over the outside of your toes. Many injuries in running come from a lack of this stabilization of the femur.”

Lastly, Johnston notes, the strength, agility and balance that come from cross-country skiing are an aid to running in the mountains and on the trails, where terrain is variable and more muscles and athletic skills might be called upon than when you’re running on the road.

To that end, Johnson says, the benefits of cross-country skiing extend beyond helping your running; they can make you a better all-around athlete.

It turns out, for all their fitness, runners are pretty lousy athletes.

“Let me put it this way,” Johnston says. “You and I would never be able to train ourselves to be an NFL running back, or to play in the NBA. But nearly anyone off the couch, with enough years of work, can become a pretty decent runner or cyclist.”

Skiing requires a far greater range of motion than running, and the barrier for entry is significant. “You have to ski a lot to get good at it,” Johnston says.

But if you do, you’ll find yourself with better balance, coordination and proprioception, a stronger core and improved explosiveness, all of which will improve your running. You might even develop some elusive upper-body strength. But, rest assured, Johnson says, you’ll dispose of any excess muscle mass fairly soon after returning to running.

Compare Cross-Country Skiing to Other Forms of Winter Cross Training

One huge benefit of cross-country skiing is it allows you to very nearly mimic running fitness with little to no impact, allowing you to build a huge volume of work and possibly extend your running career, Johnston says.

Since we’ve written about other forms of winter cross training before, how does cross-country skiing compare?

Related: 3 Ways Trail Runners Can Cross Train in the Snow

Snowshoe running more exactly mimics running—albeit with a slightly altered stride to accommodate the equipment—but doesn’t cut down on impact. Fat-tire biking can take away impact, but good cycling form doesn’t transfer much to running, and the limited range of cycling can actually decrease your overall athleticism. (Johnston says cyclists are even worse athletes, on the whole, than runners.)

And neither snowshoe running nor fat-tire biking will have the elevated cardiovascular effect of cross-country skiing.

“Skiing is weight-bearing, looks a lot like running and cuts down on impact,” he continues. “Also, most skiers run in their off-season, and most of them are pretty good at it.”

Johnston says classic Nordic skiing (think of a NordicTrack, where the skis remain parallel) is a motion that better transfers to running, with opposite arm and leg movements. But, he adds, it can take a long time to master. Skate skiing (where the skis push off at an angle) “is easier to learn and get to an intermediate level so you can go out and enjoy yourself,” he says. “Skating is better if you’re going infrequently.”

Transition Back into Running

Even if you are skiing a lot, Johnston recommends running at least two days a week through the winter to decrease the transition time once the snow melts.

“You have to build back the soft tissue elasticity and lower-leg strength needed for running,” he says. “One problem we see is that at the end of the season, skiers are very fit, but they don’t have the structural integrity to run as much as their cardiovascular system says they can. So they take all this fitness and jump into regular mileage and pull up with an Achilles or shin injury a month later.

“You need to build up a very specific strength for running that’s needed for almost nothing else, where you land on your foot with the force of several times your own body weight,” he continues. “Doing a little maintenance running [during ski season] shortens that transition period dramatically.”

I have been a runner since 1985 and suddenly in my 50s wanted to go skiing. After a horrible and heart pounding session at an indoor real snow ski slope near London (UK) in 2014 I gave up with the idea of skiing but in 2017 I found myself in Venice in December and I was staying at a hotel just around the corner from the bus station where there was a bus to Cortina De Amprezzo. Well, the temptation for taking the 7.30am bus and arriving 3 hours later at the legendary ski resort was too much. I swiftly booked a lesson with the second ski school I could find as the first one was fully booked. I didn’t bother to notice that it was Fondo Ski. Anyway, on the day I arrived two hours late but they still got me out for a one to one on these really thin skis and boots. I realised that I was not getting an alpine skiing lesson but a cross country skiing lesson!! Well, I only fell over twice, had a great hour on the groomed piste trail and absolutely loved the movement of the skis and simply took to it like a duck to er… frozen water. I realised that I had achieved my dream of skiing for the first time ever outdoors in my entire life, and that dream was the most relatable to my runners physical experience as Nordic skiing was just ideal for me. I booked several lessons at my local dry slope school when I got back to the UK and managed not to fall over and even started to do a turn or two but that year I retired and cash became scarce so no return to Italy for the moment.