Fast, Female and Raising a Family 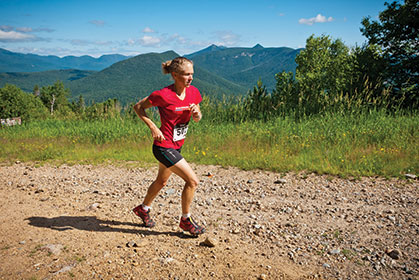 Today’s top trail-running mamas are strong and seemingly invincible, racing over mountains and quickly reverting back to mommy mode. Their goal times are unrealistic for most of us, but we can all learn from how they’ve adapted their training to the ever-changing challenges of raising children.

All According to (No) Plan

Kasie Enman, 35, of Huntington, Vermont, is a planner by nature. A top mountain runner, she set a course record of 3:45:50 in a 32-kilometer Skyrunner World Series race on Italy’s Giir di Mont and earned the title of U.S. and World Mountain Running Champion in 2011.

“I like to have my sight set on something and be moving forward in that direction,” she says.

These days, however, following a plan has not been practical for Enman. Injury has been partly to blame. But more persistent is the constant interruption that comes with parenting young children; Enman has a four-year-old daughter and a two-year-old son. 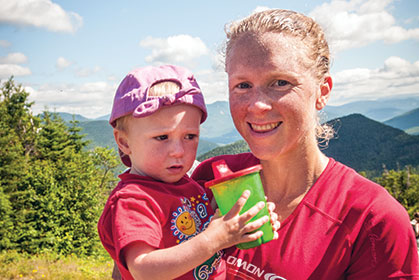 To deal with her new reality, Enman has adopted a live-in-the-moment approach to training. She is quick to clarify that it is not a meditative practice, but rather her way of coping with the chaos. Take her training schedule. Ideally, she says she’d run consistently in the morning, but she can’t count on that time now. If her window comes one day at lunch and the next day during afternoon nap, she takes it. Her race calendar isn’t as predictable either. Schedules change. Sickness shows up. The unknowns multiply with each kid.

“Focusing on now instead of the future keeps me from being frustrated,” says Enman.

She uses the “now” approach to races, too. “I used to put a lot more focus in beforehand, visualization leading up to it,” says Enman. Now, she finds that she’s not fully thinking about a race until she’s started it.

Running Mama’s Moral: Seize the day, the classic carpe diem counsel. Make the most out of each day’s run by being present, engaged in head and heart, rather than attached to a busy mind. 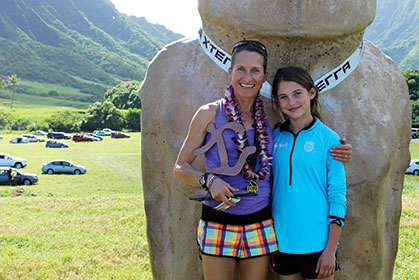 Like Enman, Lucy Smith, 48, of Victoria, British Columbia, is a veteran runner. Smith is a five-time Canadian Cross Country Champion and has been on the national team for triathlon, duathlon and distance running. She dropped her professional status when her kids were younger (they’re now 15 and 10), but remains fast and competitive, having finished as the first female in the XTERRA Trail Running Championship in Oahu, Hawaii, in 2012.

Smith is a coach for LifeSport Coaching, owned and operated by her husband, Lance. Her website bio reflects not only how she coaches but the way she approaches her own goals: “I will help you find a balance between meeting your performance goals and striving for your dreams, while balancing family, career and life.”

It’s a juggling act Smith is familiar with. Her current balance is achieved by adjusting her race calendar so that it is heavy in the fall.

“I tend to race really well in the fall when I have time [while kids are in school] and energy to do the workouts,” she says. “I’ve become good at accepting that kind of schedule. It matches my priorities as a mom and a coach and where I want sports to fit in my life.”

Running Mama’s Moral: Change the lens you use to look at potential races. Make your scope broader. Look for new opportunities that suit both you and your family. 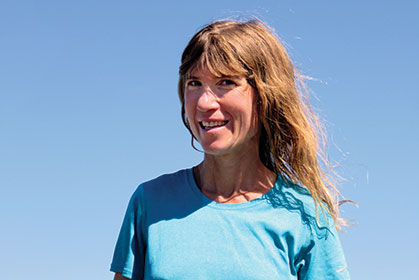 Nicole Hunt, 45, of Warm Springs, Montana, ran all through her first pregnancy, and got right back to fast finishes a month after having her son in 2008.

Fast forward a few years to November 2011—and add two more births. Twin boys. Not surprisingly, Hunt’s recovery was slower—years slower. Sure, she still ran: Four miles on the treadmill, intervals around the house, a 12-miler on the weekend. But her energy was always off, and her times were slow.

“Having children was such a huge blessing for me,” shares Hunt, “but for my running, I really felt like I hit rock bottom, because I thought I would never be fast again.”

In addition to a two-year stint of getting up throughout the night for the twins, Hunt acquired Hashimotos’ disease, in which the immune system attacks the thyroid. Once diagnosed last year, Hunt started on thyroid medication and implemented dietary changes. She got her strength back, and has resumed her training routine of three good workouts a week.

“I just kept believing in myself and working through it,” she says of those dark days. In hindsight, she admits that trying to train when she was not healthy was not the wisest choice. But running was part of her identity and she persisted until, eventually, “I could see little glimmers of hope that I could be fast again.”

Now that Hunt is back to fast, posting PRs and running mountain races, she is able to see the benefit of her slow recovery. She gained internal strength.

Running Mama’s Moral: Practice being positive. Use your training runs to strengthen your body and your outlook.

1. Practice More Patience
Parenting responsibilities are unpredictable. They cut into training time and can dampen your spirits. Don’t fret. Forgive the misses and have faith. “If you just keep going with enough consistency, you’ll get where you want to go eventually,” says Enman.

2. Isolate Illness Opportunties
Limit your chances of getting sick before race day by carefully choosing where you go and whom you see. Hunt goes as far as to keep herself and her kids close to home two weeks prior to a race. Fortunately, for now, she home schools them.

3. Reel In Your Race Line-Up
Too many races can be taxing on a runner and her family, especially when travel is involved. Seek out races closer to home and don’t be married to race series.

4. Show Some Love for Your Support Crew
Whether it’s your husband, grandma or auntie who helps with your kids while you run and race, remember to thank them. Keeping them happy helps keep you happy.

5. Run Mama Run
Getting out the door to run gets more challenging with kids, but you know that your mind and body will feel better after, even if some runs are less than stellar. The jogging stroller is a wonderful invention. Running with other mamas motivates while solo runs save your sanity.  Maintaining the habit is the most important thing.

Heidi Hill is the author of Fit Family and a freelance writer specializing in stories connected to sports, fitness and family. This article originally appeared in our September 2015 issue.