How Patricia Franco Set the FKT on Mt. Whitney (and how you can make your own FKT adventures)

FKTs are all the rage right now; you don’t need to be going for the world’s fastest time to get in the game. 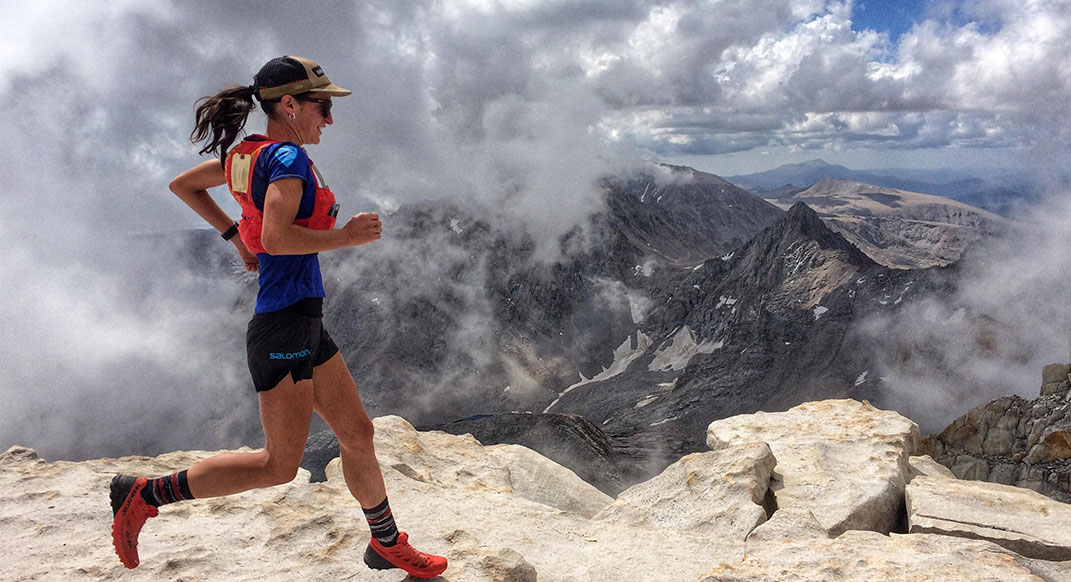 When she clicked “start” on her watch on August 17, 2018, Patricia Franco was at 8,356 feet elevation. Looming above the parking lot was Mt. Whitney, a 14,505-foot behemoth. Over the next 4 hours and 16 minutes, she’d enter rarefied air, both at the summit and in the record books. The final stats: 10 miles, 6,300 feet of total climbing, a few million rocks, and 54 minutes off the previous FKT from Charity Dubberly on the “Mountaineer’s Route.”

For the 26-year old Franco, it was a long time coming. She first laid eyes on the mountain in 2016. Sometimes, that gaze was a bit blurry due to tears.

“I had just dropped out of an MA program at the University of Oregon and started aimlessly driving my teardrop camper down the coast until I ended up in the Alabama Hills at the base of Mount Whitney,” Franco says. “I was nursing a stress fracture from overtraining and I was nursing my wounded pride as I had enormously let down my family and professors who had helped me get into graduate school. The Eastern Sierra cradled me for three months as I sobbed and moped and hobbled around.”

She used the down time to learn to climb. And she kept her gaze skyward when she made a promise to herself:

“I’d be back when I was more able-bodied and that I’d climb that damn mountain . . . if I was ever able to run again.”

Her body healed, but there was unfinished business. Whitney had been there for her during her lowest moments. Now she needed to thank Whitney in person.

So she trained, she planned, she scouted and she did it. Franco knew that nothing would change that day, no matter what her time. But, she says, “it was crucial step in a healing process that I desperately needed.”

Franco scouted the entire route twice with her supportive partner, Ryan Phebus, an elite mountain runner himself who set the ascent record on the same day. On their scouting missions, they had a few route-finding fails that prevented them from repeating their mistakes when pushing at their limit.

Your motivation can be entirely different than Franco’s, or your training partner’s or anyone else’s. The allure of the Fastest Known Time goes beyond the F. It’s about moving as quickly as you can on the trails to find your answers. You don’t have to give an F about the F to have an F’in life-changing experience.

Plus, from a training perspective, FKTs can be the perfect stimulus to structure a training block or prepare you for more formal racing. However, FKTs are different than races due to the self-sufficiency aspect. There probably won’t be flags to follow or peanut butter cups to eat at aid stations. Franco describes three ground rules she learned on her journey.

Franco pulls no punches: “Getting off route is not only extremely demoralizing, it can be dangerous, if not fatal.” That goes for the rocky slopes of Mt. Whitney or the smooth singletrack of your local park. Your brain may be oxygen-deprived on the big day, so study maps, write down checkpoints with distances and expected times, and consider programming a .gpx file into your watch. “If your goal is to move quickly you don’t want to have to be making route-finding decisions,” Franco says. “You want to be moving confidently in the right direction.”

Franco scouted the entire route twice with her supportive partner, Ryan Phebus, an elite mountain runner himself who set the ascent record on the same day. On their scouting missions, they had a few route-finding fails that prevented them from repeating their mistakes when pushing at their limit.

Part of the fun of FKTs is reading accounts of other kindred spirits, particularly on the wonderful Fastest Known Time website. For Franco’s attempt, she could go all the way back to 1873, when John Muir became the first person to climb the Mountaineer’s Route. It took Muir a full day, so perhaps it was only of limited utility.

Key things to think about include time of year, traffic on the route and refueling opportunities. And for particularly epic routes like Mt. Whitney, you need to know your technical abilities. This is where Franco’s climbing background came in. “During my scouting missions, there were icy snowfields at the summit block that I had to avoid by climbing 5th class rock to the summit,” Franco says. “When I got to the summit block during my attempt, the snow was mostly melted, allowing me to take a less risky route to the summit. I was banking on the snow being melted, but I was prepared for it to not be as well.”

That answer almost made me poop my pants with nervousness. If you’re anything like me, and you are researching a similar route, you may want to take a gentler option.

Franco lays out the stakes simply. “Safer may not always be faster, but death is definitely not faster.”

Err on the side of safety whenever trail running, but especially in the backcountry or in exposed sections of trail. At the end of the day, when you’re crushing your recovery pizza that night, you probably won’t care that much about a few minutes spent making sure you don’t leave a pizza yourself on the trail. (Sorry.)

Finally, remember that your FKT may be a solo effort, but you never know who you might be inspiring. As Franco says, “Without Charity and Tina Lewis’ attempts, I wouldn’t have known what was possible,” especially on such a difficult route.

And Franco aimed to pay it forward. “Part of the hope in doing the Mountaineer’s Route was to make objectives like this less intimidating for women to tackle. I wanted to help set the bar for more women to explore in the mountains, be it on ‘standard routes’ or on far less standard routes.”

“I can’t wait for someone else to throw down a fast time that just blows my socks off!”

The big takeaway? Even if you aren’t the fastest, consider jumping in the FKT game. Just make sure you bring an extra pair of socks in case the first gets blown off somewhere along the way.

—David Roche partners with runners of all abilities through his coaching service, Some Work, All Play. His book, Happy Runner, is co-written with his wife, Megan, and available for pre-order now at Amazon.