Kathryn Drew and the Power of Consistency

She won the Chuckanut 50K and Canyons 100K already in 2019, but she laid the groundwork for that breakthrough with years of consistency. 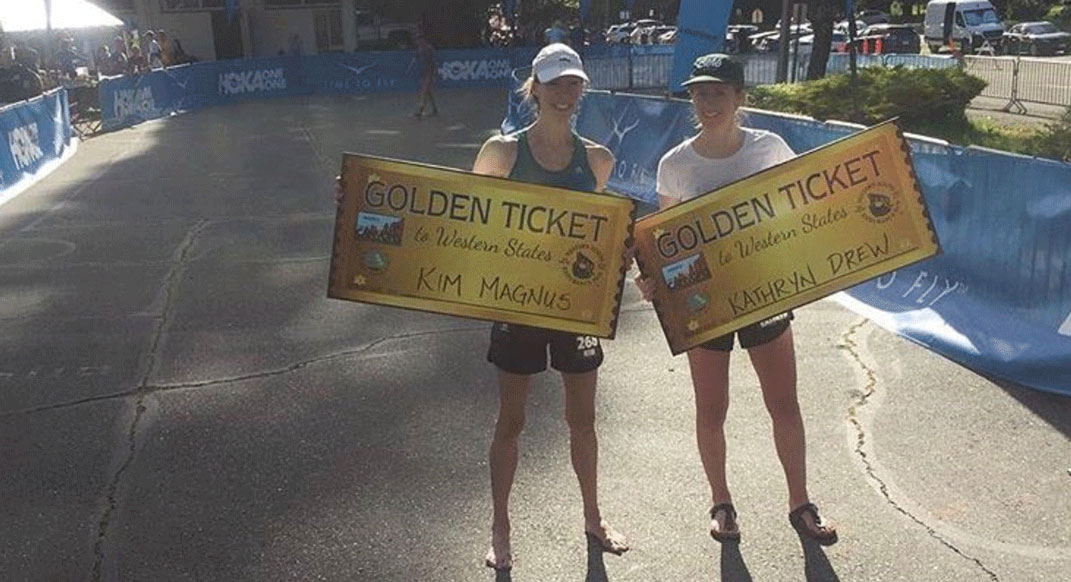 “Just be patient with yourself and laugh as much as you can along the way,” says Kathryn Drew, winner of the 2019 Chuckanut 50K and Canyons 100K. “Put in the consistent work over time and you will see the payoff.”

On March 17, during Washington’s iconic Chuckanut 50K, Twitter was abuzz (as Twitter has a tendency to be). Who was leading the women’s race? I saw posts that said it was “Anne” or “Kate” or my favorite, “Unknown runner.” It was actually Kathryn Drew, and she’d go on to win Chuckanut, tromping through the snow that covered parts of the course. She is Canadian, after all.

Six weeks later, she toed the line again, this time at the Canyons 100K in California, with a golden ticket to the Western States 100 up for grabs. Kat still flew under the radar among some people, even as she flew up and down the trails. I got a text message from a friend during the race that said, “Not sure who that is leading the women’s race, but I heard she’s from Canada.” Kat from Canada went on to win the race on a blazing hot day after running over half the race with another superstar from Vancouver Kim Mangus. They won’t be stereotyped by my lazy Canada weather jokes.

These big wins didn’t come from nowhere. Kat was on Team Canada for the World Championships in 2017 and she was 3rd at the Squamish 50-Miler in 2018, among lots of impressive races. But perhaps her history at the Chuckanut 50K is most instructive of an athlete putting in the work over time, gradually earning it so that it only seems like a breakthrough from the outside.

Notably, the median time in 2019 was nine minutes slower than in 2018 due to the tough course conditions, which foreshadowed another breakthrough at the Canyons 100K just over a month later. How can an athlete progress like that? Is it massive mileage, hard workouts, something else superhuman? Actually, according to Kat, it’s something simpler.

“Just be patient with yourself,” she says. “Put in the consistent work over time and you will see the payoff.”

When I asked her about the biggest life advice she had for this article, I think she summarized herself in a single sentence: “Remember to have fun, be silly and not take yourself too seriously.”

A Bit More About Kat From Canada

The first thing that jumps out about Kat, a 32-year old event manager from Vancouver, is her kindness. The next thing is her humor. And both were on display when we met on the course at the 2017 World Champs.

I was having a rough day, doing all I could just to get to the finish. Kat caught up and passed me, starting with kindness. “You are so amazing, and you look great. Come on, run with me, we got this!”

I responded in the midst of a cramp with something that probably sounded like Oscar the Grouch. “Grumble grumble agh ouch go on without me grumble.” She recalls that I might have yelled out, “SAVE YOURSELF.”

She smiled, and responded as she powered up the trail. “I believe in you, but you look like [crap] right now.” She used a different word than crap, knowing that it would make me laugh through the suffering in the middle of an Italian forest.

That’s Kat, the type of person that lifts everyone up, laughing as much as possible along the way. When I asked her about the biggest life advice she had for this article, I think she summarized herself in a single sentence: “Remember to have fun, be silly and not take yourself too seriously.”

She continued with a laugh, “Try not to worry too much and keep things in perspective, something I am still working on myself.”

When we talked in March, Kat had just been through the ringer at work, with so many 10-plus-hour days that she couldn’t run as much as she would have liked. So for the bulk of her training, she got by on lots of laughing and maybe a bit of crying (both make for great core work).

It turns out that having fun and keeping things in perspective also led to her biggest training asset. Through all the [crap], she just kept grinding.

I don’t love breaking down the training of individual athletes, since so much goes into it that numbers don’t always paint the full picture. However, Kat’s training is instructive because it shows that you can reach your potential by zooming out and working steadily over time, rather than having to go all-in physically with huge training loads.

In the 28 weeks leading up to Canyons (which included the Chuckanut 50K and Bandera 100K, where she was 3rd), she averaged 52.9 miles and 5,446 feet of climbing per week. Most weeks had five runs, with rest days on Monday and Friday, and the weekends being dedicated to trail runs. And that isn’t a cherry-picked snapshot—it includes her highest-mileage month (December, when she ran 271.8 miles).

What is striking looking at her training history is that she just kept up the consistency over the course of months and years. She credits a few things in particular.

Kat takes two rest days most weeks due to a busy professional life and a desire to avoid injuries.

“I love rest days,” she says, possibly with a hint of sarcasm at the edges of her voice. Then she gets a bit more serious. “I learned to listen to my body and be grateful for what it can do. My main goal was not to run myself into the ground so I can keep doing the things I love.”

Her wisdom is that everyone is different, with different bodies and backgrounds and stresses. So it’s essential not to try to do the training of someone living a different life.

“Don’t skimp out! What you eat plays a huge role in how you feel and function, so eat the yummy stuff.”

In my head, she said this between bites of a burger or pizza or possibly poutine.

“Never let yourself go hangry. That is just the worst and never a fun time for anyone.”

Food played a big role in Kat finding her own strength, and eating plenty is a key part in all athletes finding that for themselves.

Sometimes, Kat’s life gets so busy that it’s all she can do to get out for a three-mile run before dawn. And she has learned to be OK with that.

“Other things count as training too,” she says. “Sometimes, I count really challenging projects at work as mental training and treat them like ultras.”

It’s not always easy, though. Kat said she feels stress and self-doubt all the time, like almost all of us do.

“I always think that I could have done more or get stressed that my training block didn’t go perfectly,” she says. “I’m trying to learn how to let it go when there is the odd day when life happens, and I may not be able to get my run in.”

The build to Canyons definitely didn’t go perfectly. Two weeks before, when she was putting the finishing touches on her fitness, she got sick. She took four days off and ran just 13 miles that week. A couple of times in 2019, work got too busy to do much other than run around the block a few times instead of doing long runs. But through it all, Kat tried to give herself the grace to be imperfect.

“It’s rare for anything to go perfectly,” she says, talking about training and work and relationships and everything else. She then laughs with some of that infectious joy that everyone loves about her.

“But you can do a lot if you keep showing up and trying to smile through the [crap].”

—David Roche partners with runners of all abilities through his coaching service, Some Work, All Play. His book, The Happy Runner, is about training and life (and puppies), and it’s available now at Amazon.

Way to go, Kat! Very happy for you, with all the hard work and yes, consistency sure pays off!

Great article! Seeing the timeline on those Chucky results getting better and better was enlightening. A great reminder to keep at it no matter what life throws at you.