To support long-term consistency, it’s important to not idealize the act of running. 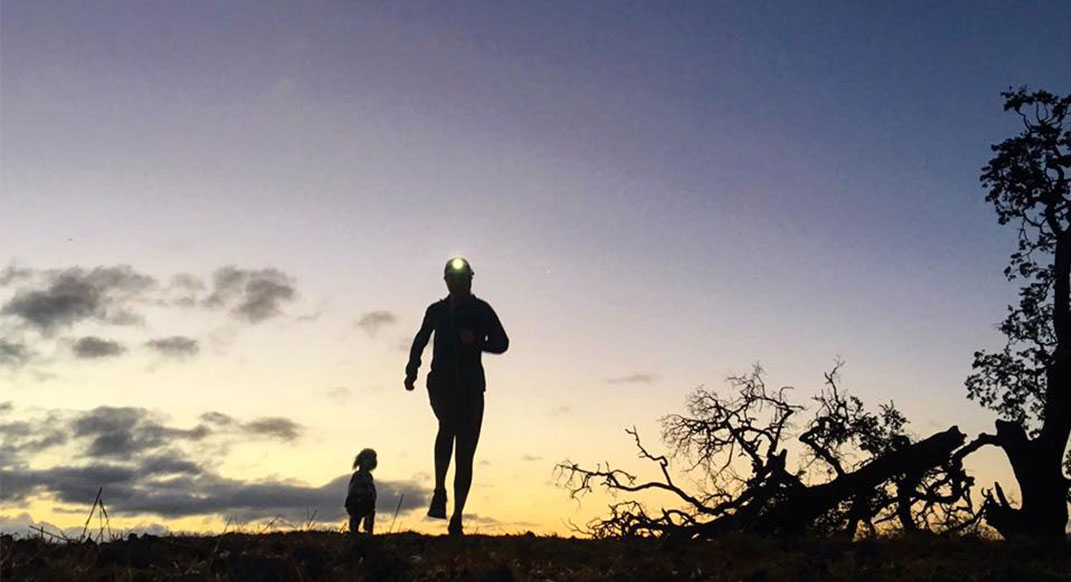 Don't be fooled by the Instagram photo. This early AM run kinda sucked.

Let’s start this article with an assignment: open Instagram and click on the “Search” button. What do you see? To start, you probably see at least a few mostly naked people. It is the internet, after all.

In addition, if the almighty algorithms think you are a runner, you’ll probably get photos and videos of people running with glorious form, on glorious trails, with gloriously big smiles. The captions? You guessed it . . . glorious.

If we programmed a computer to use machine learning to understand running via social media, it’d probably think running was a mostly perfect, amazing activity. #brand #brandmotto. I am guilty, too—it’s just how social media works. No one wants to hear about your heavy legs and sore feet. It’s a highlight reel by design.

But sometimes, athletes can think that the highlight reel is a documentary. The thought process goes something like this: “Everyone else talks about running being this incredible, transcendent activity, but it’s not often like that for me. Am I doing something wrong?”

I see that all the time from athletes, especially as they are starting out. However, even the pros fall into the trap sometimes. Here’s the thing: running often does suck, for everyone, with complex physiological and psychological reasons why. The suck has to be an accepted part of the process to support the consistency required to have those effortless moments of transcendence later.

Enduring bad runs is not only a rite of passage, it’s an essential part of the growth process. So embracing the suck needs to be part of the reason a running life is fulfilling in the first place. Why else would you stick with it? The brain chemicals are good, but there are quicker and easier ways to get them.

It’s helpful to understand why running can suck and ways to work through it so that bad runs don’t halt your growth. Here are four things to think about.

In the TV show Parks and Recreation, lovable oaf Andy Dwyer decides to train for a physical fitness test, going to the track to do a timed run. After a single lap, he strips down to his underwear, lays down on the ground, and screams something we all have probably thought: “Running is impossible!”

In my first endurance run as an adult, I didn’t even get as far as Andy. It was about 200 meters before I stopped and walked back, my calves sore for days afterward. Years later, I try to hold onto that memory as a reminder of what some people are going through when they are starting out.

Simultaneously, the aerobic system gets better at processing oxygen, making it feel less like you are underwater, while biomechanics improve so you don’t have the gracefulness of an uncoordinated water buffalo.

Fortunately for me, injuries can serve a similar purpose. My wife and co-coach, Megan, says every layoff is a blessing, partially because it provides a helpful refresher course on how difficult running can be. Just today, after a week off due to an ankle sprain, I set out on a 10-mile run only to turn around early and jog/walk back, demoralized by how horrendous I felt. “Savor that like a fine wine,” Megan might say. “It’ll make you more empathetic for what others are experiencing.”

If Andy Dwyer had stuck with running, he would have learned the same lesson that most long-term runners do. Running goes from impossible to fun gradually as the body adapts. The most important adaptations are musculoskeletal–the bones, joints and connective system all strengthen under the load of running. Simultaneously, the aerobic system gets better at processing oxygen, making it feel less like you are underwater, while biomechanics improve so you don’t have the gracefulness of an uncoordinated water buffalo.

After layoffs, the body goes through a similar process, though even with complete detraining, it usually reaches previous levels much more quickly than before. The reasoning is complex, possibly even having epigenetic explanations, with changes in gene expression altering how the body works on a fundamental level.

Solution: When running feels impossible, slow down and focus on shorter, more frequent runs. The starting-out adaptations are primarily achieved through consistent, low-level stress, plus short and slow runs are easier to conquer on tough days. Even 5 or 10 minutes at walking pace counts.

Running is different than aerobic sports like swimming or cycling because the body has to absorb and retransmit more energy through impact. That’s a main reason why top cyclists and swimmers might train four to six hours a day sometimes, but top runners rarely average above two hours. There’s simply too much impact to go longer without breakdown.

How that impact feels can vary widely based on the day. Sometimes, you feel light and colorful, as if your legs were possessed by unicorns and you’re running on a trampoline. Other days, every step feels like you’re repeatedly being punched in the ankles, knees and hips. Impact forces can feel more significant when you start out and as you age, even though the actual numbers aren’t changing much at all.

Solution: practice recovery techniques that improve how your body absorbs and transmits those impact forces. Good nutrition, proper form and dynamic flexibility/strength work can make your body feel less like the nail, and more like the hammer.

When athletes put on a heart rate monitor for the first time, it’s sometimes like stepping on the scale after Thanksgiving dinner. I THINK THIS DEVICE IS TELLING ME I AM DYING. In my coaching experience, runners often self-select higher heart rates on easy running days than when cycling or swimming at the same exertion level. All easy is not created equally, unless the perceived exertion that corresponds to “easy” is methodically calibrated.

Persistent higher heart-rate efforts increase musculoskeletal breakdown (often leading to higher levels of creatine kinase on blood tests, a marker of muscle damage), overall stress (causing higher levels of cortisol, a biomarker for chronic stress) and general fatigue (producing higher levels of Oh dear god do I have to run again please just let me lie in bed). Even if your heart rate is lower, running can sometimes feel like a lot of work due to those pesky impact forces.

Solution: when in doubt, slow down. Easy runs cannot be too slow for most athletes. Leaving your ego at the door will lead to more joyful runs and more sustainable progress.

Go for the Honnold

In the fantastic new movie Free Solo, Alex Honnold sets out to climb the 3000-foot El Capitan rock face in Yosemite National Park . . . without ropes. Spoiler alert: he does it! It’s one of the most remarkable athletic achievements in human history.

There was a scene where Honnold was put in an fMRI machine, measuring his brain’s response to different stimuli. His amygdala, an ancient part of the brain associated with emotions like fear, barely lit up at all when others’ amygdalas lit up like Christmas trees. The conclusion of the researchers was that Honnold processes emotions differently, likely with a higher threshold for what stimulates him. It’s not that he doesn’t feel fear, it’s just that he doesn’t feel it the way I would (aka curling into a ball on a rock ledge and waiting for the vultures to come get me).

For our purposes, the takeaway is that everyone processes stimuli differently. The brain tells almost all of us that running hard is uncomfortable. As the body floods with the fatigue-correlated byproducts of intense exercise, many of the cells in our bodies go through a checklist. Are we being chased? No? Then stop, and feast on whatever is in the pantry in case we don’t kill an antelope soon. Running discomfort is an evolutionary response that doesn’t care that humans started running for fun in the 1970s.

Whether it’s nature or nurture, those intense feelings of discomfort are less disabling for some athletes. But almost everyone feels something similar (though genetics do change experiences with extreme cases on either end. For example, about one in a million people may have a mutation in the PRDM12 transcriptional regulator gene that makes them unable to feel pain at all, as outlined in this very cool 2015 Nature study, though how that applies to endurance athletics is uncertain).

Solution: aim to perceive of discomfort as a neutral observer. Yes, it’s uncomfortable, but no, you don’t have to stop. And when you let yourself document it, running-induced discomfort actually isn’t that bad at all. You might not become Honnold, but with some practice, you can train your brain to light up a bit less with the same stimulus.

Even if you do everything right, training consistently and intelligently for years on end, running will still suck sometimes. I’d guess 10 percent of my runs feel rather unpleasant, down from 30 percent when I had been running for a few years (and 100 percent when I first started). Not only is that okay, it’s an essential part of the adaptation process.

If you felt perfect all the time, you’d probably be selling yourself short in training, not pushing your limits at all. So embrace the suck. It’s something we all share, even if we don’t always share it on Instagram.

Nice Article, David (I knew this was yours just by the title!)
Only 1 in 10 of your runs suck? That’s impressive! I’ve been running almost daily for about 3 years now and I’m at about the “1 in 4 runs suck” level. I guess we just get used to it more and more over time until it is merely background noise in our busy lives! Hope that ankle feels better!

Great article. My new motto will be, “Embrace the suck!”

Most of my runs do not suck. What sucks is getting up at the ass-crack of dawn to get them in before work. Once I’m out and running I feel great. But every morning when the alarm goes off I’m miserable and question my own sanity. But it’s like groundhog day, I just keep doing it over and over.

Thanks. As an on again, off again runner – I needed this article. Take home message for me was that consistency and small runs are better than the nothing I do most days (working mom). Your detailed descriptions of the challenges to new runners is something I want to get beyond, but keep the suck going by not getting out there and doing it. One day when I run an Ultra I will have you to thank.

Love this so much.

Good article. David Goggins is another ’embrace the suck’ preacher (and insane runner/athlete), and a really good motivator for anyone needing a mental push to get out of bed while the sun’s still asleep.