Spice Up Your Daily Run

The daily run can become a grind. Introduce some variety to keep motivated and add a productive training stimulus.

The good days provide doses of effortless transcendence, the bad days make for funny stories, and the in-between days can be micro-adventures, even if those adventures just unfold inside your own head.

One of the more disconcerting realities of the human condition is that even the most uplifting, joyous daily moments have a tendency to become mundane over time. Relationships can start at a rolling boil before going to a simmer and cooling to room temperature. Your favorite meal may become a chore if you eat it every day. And if you aren’t safe, your passion can become another box to check on a to-do list.

You see it all the time with jobs. A good example is writing. Most writers are doing what they dreamt of, yet lots of writers grow to resent it (after all, as Lawrence Kasdan said, “Being a writer is like having homework every night for the rest of your life”). That resentment can apply to relationships too (“Darren/Elaine didn’t do the dishes! Does he/she even care about me?”). And as almost every lifelong runner sees at some point, the daily act of running can become a chore, full of resentment.

Psychology indicates that the brain
best processes time
by breaking it into smaller chunks,
and using surges on a run is a good way
to harness that principle.

That makes sense. The daily easy run often is mundane by definition, just like the 4000th time you have your dream meal or 20,000th day of a relationship. In a closed system, entropy takes over. At least, entropy usually takes over  …  unless more energy enters the system. So the key to avoid resenting the mundane grind is to inject some energy into your running life.

For some athletes, that can simply come from within, whether it’s intrinsic competitive drive or absolute love of the process. Others need to be more proactive. When I sense things getting stale for an athlete I coach, aside from registering for races or scheduling adventures, I try to suggest ways to rekindle the fire for the mundane daily run through some suggestions for spicing it up. These strategies can make the “boring” days a bit more exciting, supporting the long-term consistency needed to explore your potential.

For me at least, I have noticed that doing the same route every day is almost as good as creating an invisibility cloak for some of the fun, exciting things I pass. The military would probably pay trillions of dollars to harness the power of repetitive route choices, cloaking aircraft carriers the way my brain seems to cloak trees and meadows on some local trails. One way to make sure your brain doesn’t get complacent with the daily run is to mix it up, plus it can be an excuse to add a unique training stimulus.

On a typical easy run, running up-and-back a few times on as many local hills as you can will give you appreciation for the space around you. Plus, it’ll add more vert that can help with adaptations for uphill and downhill running. Where I live just east of Boulder, the tallest hill within a couple miles is around 120 feet. With this approach, on a normal easy run, I can rack up 2000+ varying and unpredictable feet of climbing.

The Hill Gobblin’ is especially useful in places with minimal climbing opportunities. When I lived in Washington, D.C., I’d sometimes get almost 3000 feet of climbing on a 16-miler in Rock Creek Park, which is not exactly known for its summits. Run the downhills with purpose and you should be more prepared for trail adventures over most terrain.

After a warm-up, run 20 or 30 seconds faster every five minutes

Time passes slowly. If you want proof, go sit on a stationary bike without a podcast or music, then look down at the time display when you think 30 minutes have passed. If you’re anything like me, you’ll look down at 5 minutes and realize that you may have found an exception to the Theory of Relativity. New theory: if you could spend life on a stationary bike, you’d approach immortality.

Psychology indicates that the brain best processes time by breaking it into smaller chunks, and using surges on a run is a good way to harness that principle. On top of that, the surges will provide a speed endurance stimulus that could improve running economy (see this 2018 study in Physiology Reports).

Keep the surges under 30 seconds, and you can do them on easy runs with little risk of breakdown, while keeping the entire run mostly aerobic. Lengthen them to a minute or so for a baby workout that provides more aerobic stimulus. Another way to use the same principle is to stop at a playground and do some monkey bars, pull-ups or push-ups a few times in a run.

Many athletes will find that the time between surges seems to pass more quickly. Einstein may disagree, but he didn’t win his Nobel Prizes for trail-running articles, so what does he know?

Run every street and/or trail near your home

In late 2018, the trail-running legend Rickey Gates set out to do something simultaneously epic and pedestrian—he’d traverse every street in San Francisco. Initially, that might seem pretty simple. How hard can it be? Well, as anyone that has walked across the city knows, San Francisco is essentially the Himalayas with hipsters. Also, it would total around 1300 miles.

It probably helps if you like the people
you are running with, though a little bit of disgust
can probably fuel some good hate-running too.

Over 46 days, Gates conquered the challenge, gaining a greater appreciation for his surroundings in the process. As he told Runner’s World, “It provides its own mountaintop to get to and come back down, and it’s right there.”

Try to emulate Rickey on the trails or roads where you live, and your senses will probably come alive, plus it will add purpose to the daily run. At the very least, it will make for some cool GPS files.

Leave the watch at home, bring a camera and find the daily beauty

On a run, have you ever seen a bear, moose, bobcat or particularly menacing cow? If so, your senses probably came alive as you suddenly took in all your surroundings more fully, gulping up the sights and sounds. Some of my most memorable runs involve seeing scary wildlife, probably because it sharpened my focus the rest of the time.

Those same senses are lying mostly dormant on many runs. Bringing a camera and leaving the GPS at home can make you more attuned to everything around you. I’ll often challenge athletes to come back from a run with three photos of beauty. That can be clear beauty, like wildflowers or mountains. But my favorite images involve things that your brain might gloss over otherwise—a bridge lit in the morning light or a road stretching off the the horizon. Try the three-photo challenge and see what you find. In addition to the pictures, you might come back with some purpose and peace on an otherwise normal day.

Find a running partner, run with music or a podcast (if safe) or other method to reduce perceived exertion

A lot of this article comes down to reducing perceived exertion, or how difficult an effort feels, rather than actually changing the underlying physiological stimulus too much. There are a few proven ways to reduce perceived exertion without changing fitness.

Running with someone makes a big difference, taking you out of your head and making you more present in the moment. For example, a 2016 study in the Journal of Exercise Physiology found that social support increased enjoyment and reduced perceived exertion. It probably helps if you like the people you are running with, though a little bit of disgust can probably fuel some good hate-running too.

Studies show that at moderate and easier efforts, music and similar stimuli can help reduce perceived exertion, like this 2017 study in the Journal of Sport and Health Science. Though as I have learned in past articles, wearing headphones while running is a topic that people have very strong feelings about, similar to politics or who should win The Bachelor. So do whatever makes you feel comfortable.

Sometimes, running will be a mundane grind. Running progression requires hundreds of runs, consistently layered on each other over many years. Gosh, just typing that out is daunting.

In reality, though, you just do one run at a time. In each run, you can find beauty in your place, joy in the motion, hills you didn’t know existed or even a new song/podcast you love. The good days provide doses of effortless transcendence, the bad days make for funny stories, and the in-between days can be micro-adventures, even if those adventures just unfold inside your own head.

So yes, it will be a grind. But it doesn’t have to grind you down. 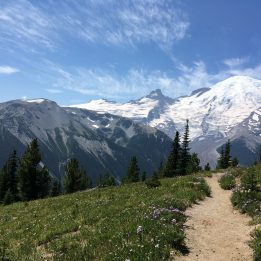 I like to incorporate holding my breath for 10 seconds on flat parts of my trail running. Its an easy way to create oxygen debt.