3 Running-Form Tips to Make You Faster

Simple fixes to increase your running efficiency and stave off injury 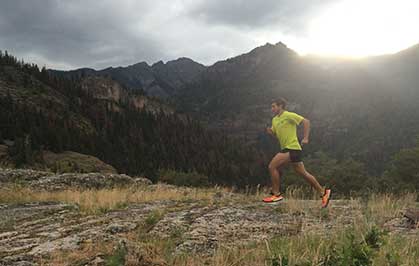 If you’re anything like me, you have probably opened your computer a few days after a race, budding with excitement to see the race photos. You remember spotting the photographer at mile two, and striking your best pose as the camera clicked. You nervously click on the link, hoping for the best … and then you see it. Wearing your race-bib number is what appears to be a clumsy ostrich trying out for a twerking competition.

The running-like-a-twerking-ostrich struggle is real—and not just superficial. There are a few easy things you can practice to improve your form, helping you get faster and more efficient as well as more graceful. Here are three running-form tips you can benefit from today. 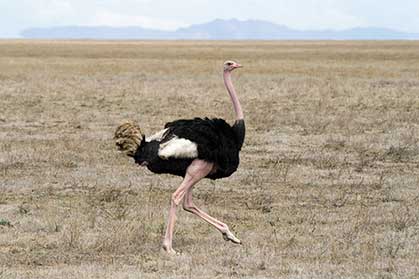 Don’t look like this in your race photos. Photo by Stig Nygaard/Creative Commons 2.0

When you see trail runners in their natural habitat, you can usually tell if they run a lot of miles. That intuition comes not from visual cues like skimpy split shorts or compression gear, but something much simpler that most high-mileage runners share—shorter, quicker strides.

Higher cadence reduces injury risk and increases efficiency by lessening the force of impact and braking motion of each stride. I recommend to athletes I coach that they count footfalls a few times each run (once every 10 minutes at first). For 30 seconds, count how many times one foot hits the ground. Anything over 42 is great. If you are below that total, shorten your stride slightly, focusing on relaxing your hips and letting your momentum do the work. On slower, easier days, this may feel awkward and difficult at first, but over time it will become second nature, and you’ll be faster because of it.

Guys and girls, I know we haven’t known each other for too long, but it’s time we had an important conversation about your butt cheeks. They are your body’s powerhouses (and not just for twerking competitions). So how do you engage your glutes? It’s not easy, but unlocking their power is the most important step to faster (and less injury-prone) running.

To properly employ the glutes, first, imagine that, for some reason, you need to secure a quarter between your butt cheeks while running. (Perhaps you forgot your wallet.) Don’t clench, but relax your hips and allow your glutes to stay together.

Second, while standing, relax your hips and feel your glutes engage. Your hips should move forward slightly and you may feel your spine straighten. That posture is what you should be using during your next run. Runners can leave minutes on the table (and succumb to preventable injuries) if they neglect the power of the glutes.

This final tip builds from the other two, and it may be more important for those of us who didn’t grow up running long distance. When you picture graceful elite marathoners, you probably think of a pronounced back kick, with the heel almost touching the glutes. By contrast, normal runners can seem like they are riding a bike, with pronounced forward motion and a strong push into the ground. 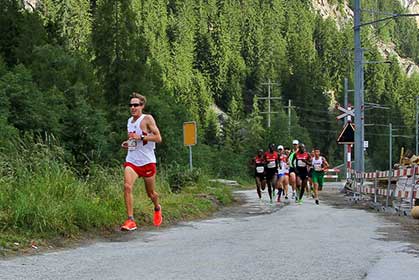 Road/track elite Andy Wacker has brought his fast, efficient stride to the trails with great success. Photo by Tad Davis

To be more like the elites, focus on engaging the glutes as described above, with the added emphasis of envisioning the running motion happening behind you. Instead of pulling forward, flow backward. In reality, your form may barely change, but visualizing the motion behind your center of gravity will open up parts of your stride (and speeds) you’ve never seen before.

Combine those three tips, and you’ll be smoother, faster and healthier in no time! Ostrich-free race photos guaranteed.

David Roche is a two-time USATF trail national champion, the 2014 U.S. Sub-Ultra Trail Runner of the Year and a member of Nike Trail Elite and Team Clif Bar. When not frolicking on single-track or working as a public-interest attorney for the Environmental Law Institute, he enjoys spending time with his wife and puppy, both of whom are substantially better at running than he is. He works with runners of all abilities through his coaching service, Some Work, All Play.