Train in the Heat to Race Better at All Temps 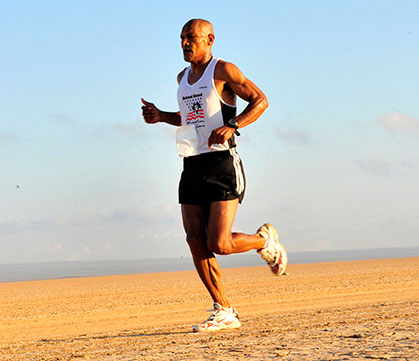 Training in the heat can help prepare you for broiling-hot desert races—like this 15K in Djibouti’s Grand Bara Desert—but also spurs adaptations that improve your racing at all temps. Photo by Flickr user The National Guard/Creative Commons 2.0

What are your training recommendations for someone training for a race in extreme heat (e.g., Badwater 135 Ultramarathon) who lives in a moderate climate? Should you train your body to run longer on less water intake?

Our ability to adapt to heat is one of the most robust adaptations we have. And, interestingly, research shows clear benefits of heat adaptation when racing in cooler temperatures. As the temperature rises, your body attempts to maintain its internal temperature, or homeostasis. To thermo regulate, we produce sweat, which evaporates and cools the skin. Heat training can make you a better sweater, and prepare your body to deal with hot temperatures.

Western States 100 Mile Endurance Run and Badwater veteran Ian Sharman (who also coaches at SharmanUltra.com) suggests three methods. The first is a dry sauna, which, says Sharman, “provides enough heat to force the body to adapt to sweating more with less salty sweat.” Build up time in the dry sauna, staying inside it until the point of discomfort. Fifteen to 20 minutes is a good starting point. Bring some water, and, if you feel up for it, perform light exercises, like stretching or pushups.

Second, Sharman suggests hot yoga, which has the added benefit of helping with flexibility. [Related: How hot yoga can make you a better runner.] The final option is to bundle up while exercising, which is simply wearing extra clothing to raise your body’s temperature, causing you to sweat more. “Cover as much skin as possible, so long pants, gloves, a Buff and a hoodie are effective, if slightly scary for your fellow runners on the trails,” says Sharman. There is no need to run particularly fast. Be sure to bring water. “The majority of the adaptations take about two weeks, although further benefits continue to accrue up to about 30 days,” says Sharman.

This article originally appeared in our October 2014 issue.