Get Stronger On Hills (Even if You Live Somewhere Flat)

Uphills are hard no matter where you live. Here are eight tips to make them easier. 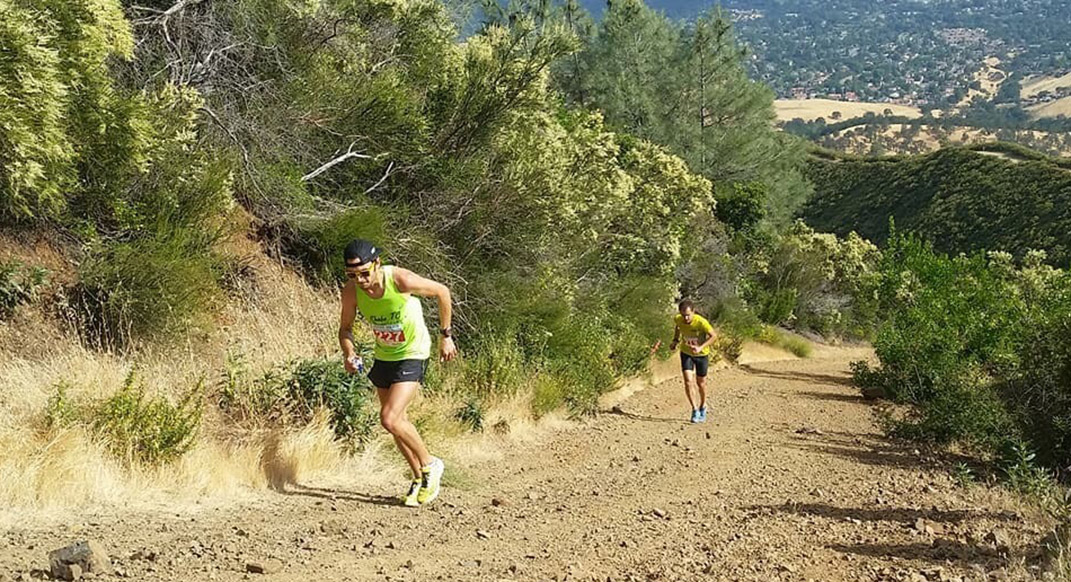 In Dante’s trail-running Inferno, the fifth circle would probably be an extended, sustained climb at 10-percent grade. When you are first starting out on trails, any hill can seem like a fiery and punishing place. But, with smart training, climbing can be heaven. Best of all: you don’t need to live in the mountains to become a strong climber.

When I qualified for the U.S. Mountain Running Team in 2014, I lived in Washington D.C., where the biggest hill was a few hundred feet. Unfortunately, the qualifying race ascended a few thousand feet. To overcome my vertical deficiency, I talked to every mountain runner I could to get some tips. Here eight lessons about becoming a better climber, no matter where you live.

Running is not always enough, especially if you don’t have mountains in your backyard. Strength training in moderation can support movement patterns that you use on climbs, increasing strength and power output. The key is to keep the movements functional and specialized for running, rather than impersonating someone in a Gold’s Gym tank top on Venice Beach.

Most of my athletes do the “5 Minute Mountain Legs” routine, where all you need are some stairs and a tolerance for pain. That circuit, done two or three days a week after hard workouts, can make mountains feel like molehills. Lots of other leg-strengthening exercises work as well— just make sure that any weighted movements are done at the direction of a specialist. Bodyweight should be plenty for building climbing strength, especially if you do one-legged exercises like the step-ups in the 5 Minute Mountain Legs routine.

2. Improve your running economy on uphills.

Running economy—the amount of energy it takes to run a given pace—is the key to developing your running talent whether you are racing on flats or in the mountains. I like to break climbing-specific running economy down into horizontal velocity and vertical velocity.

Even on a steep 15-percent grade, most movement is horizontal, so flat running economy is still the most important variable. That’s why a blazing fast track runner from the flatlands can excel in a mountain race with minimal training. To improve flat running economy, run as many miles as you can, and do short, fast strides that provide a go-fast stimulus for neuromuscular and biomechanical adaptations.

However, vertical velocity still plays a big role. So later on, after you have worked on optimizing your running economy for at least a few weeks, work on the vertical vector by doing some hill intervals between 30 seconds and three minutes, focusing on maintaining good form while running fast. If where you live is totally flat, you can do these on a bridge or a treadmill.

Hills are jerks. If left to their own devices, they’ll partner with their friend gravity to roll you back down to where you started. Running upright will make their job easier. Instead, lean forward into the hill, with your center of gravity tilted forward from the ankle. Slowly fall forward, letting each footfall stop you. A mental key that works for my athletes is to mimic the grade you are running. So if you are running a gradual four-percent grade, lean forward four percent—almost imperceptible. Meanwhile, if you are going up a ski slope, you should be as far forward as you can.

Climbing is strenuous because of the constant tension required to maintain power output while fighting gravity. To reduce exertion, try to stay totally relaxed, taking short, almost delicate strides. Experiment by running with a heart rate monitor on the same long uphill (or treadmill uphill) a few times over the course of a week. Practice relaxing—keeping your arms loose and your stride quiet—and watch the heart rate drop. Even one heart beat per minute counts!

Related: Inclination for Speed, run uphill like the pros.

Even the best climbers are pretty darn slow on hills. The key is to get comfortable being slower, focusing on keeping a steady effort over the course of a climb or a race. In general, unless a race is half marathon or shorter, you shouldn’t exceed lactate threshold (an effort you could sustain for about an hour). If you do exceed LT, it’s difficult to recover and finish with full strength, unless you are highly trained. So think about the climbing effort you could sustain for an hour—pretty slow, right? For many runners, this will require a good amount of power hiking, which can be a major tool for sustainable climbing.

Whatever you do, don’t let your effort level mirror the elevation profile. Go slower on (harder) ups and faster on the (easier) downs.

Climbing is slow. So if you climb too much, you’ll get slower.

Remember, the horizontal vector is still predominant for all but the steepest grades. If you run slow ups all the time, your running economy will suffer. And it requires a massive aerobic engine and crushingly strong legs to overcome poor running economy. It’s okay to run hills a lot, but keep many of your runs on faster terrain, and don’t worry if you can’t get into the mountains often. My perfect-world rule for athletes is that we train on fast terrain during the week, and on hilly trails on the weekend.

7. Do practice movement patterns on hills on a treadmill.

While you don’t need to climb a ton to be a great climber, your body does need to be adapted to the unique biomechanical demands of climbing, like the forward lean and calf muscle stress. If you live in the hills, do your weekly long run with lots of climbing. If you live in the flats, do repeats up the steepest climb you can find during your long run, or run extended treadmill climbs every week or two to practice form (4 x 15 minutes at 10-percent grade with five minutes flat in between is my go-to flatlander workout).

I asked my co-coach Megan what other tips we should give for good climbing. Her answer was simple: “Don’t look up.”

The longest journey begins with a single step, and the tallest mountain is climbed one step at a time. Put one foot in front of the other and don’t despair. Relentless forward (and vertical) progress can take you to some incredible places. 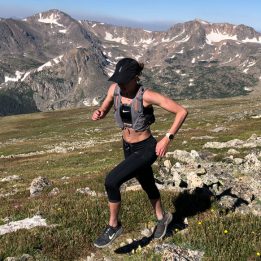 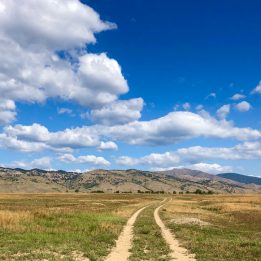 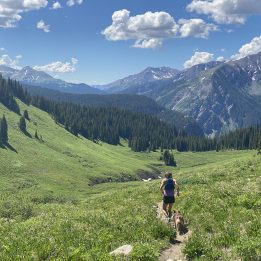 For your 4x15min climbs at 10% what effort/pace are you looking for? Or HR zone?

David Roche
Reply to  Ron B

More exact effort: somewhere between LT and aerobic threshold, so sustainable but not a walk in the park. The goal is to work on efficient climbing form, rather than get the hardest workout of the training cycle.

I try to remember to “stand tall” when running uphill, trying to prevent myself from getting hunched over to further reduce my ability to take in oxygen. I concentrate on keeping my cadence consistent while reducing my stride as needed depending on the grade…. kinda like downshifting a gear (for those of us who still live in the paleolithic and drive standards). I also repeat to myself “proud as a peacock” over and over as I ascend to keep form. I’m also thankful that no one can hear me talking to myself 😉

As you go up…you must come down. The darn ugly truth of hill running (if you don’t imbrace the hills like a puppy dog.) As much as you practice uphill running it takes different muscles and different impact forces which, downhill running needs to have the same training time/space as uphill.

I’ve been doing trail running now (switch from road after knee surgery) for about 18 mos. I’m in a mountainy area of Cali. I’m really not sure what the incline is on the several trails I go to. But, I don’t run for more than an hour. So many rocks, tree roots, fallen branches and other obstacles for the unwary. I often feel more like a tap dancer as I go over the trails. I know my recovery is tied to strength and core training. I like to do heavy power lifts on some days and then switch to single leg stuff including single leg box jumps, single leg jump ropes (oy!).

I wouldn’t trade the hills for flats. I feel much much stronger than I ever did running roads.

Great job getting out there and embracing the adventure Keith!

Any specific advice for training for a sky race, i.e., insane amounts of vert at like a 30% grade (up and down) for 15+ miles? I’ve heard experts question the value of long hill outings (i.e., repeats longer than 3 minutes) vs. advocating “course specific training” which would have me doing 30-min (or longer) repeats with 1500+ ft of gain each.

Thanks Dave. And go get ’em in Italy!

Thoughts on using stair machines at the gym? I did some of this over the winter, working in 30-min interval sets on stairs just 1 x wk, and I feel a bit better trained for at least the few short races I’ve done so far this year. Boring AF though, hate gyms.

I’m a Texas flatlander and I used the Stairmaster ( and running as many small hills as I could find) an average of once per week of up to 45 minutes to train for a 50k race with almost 5000 ft of rocky climbing. I believe it was very helpful. But next time I will use it more often and also incorporate Roche’s lunges and step ups. I would also caution you to try to find some downhills to pound those quads. I was very sore post-race from the downhills.

it continues (20 years of NE hill running) to be rare that what we can get sound hill training advice from magazines. their is so much more good training practices than whats been written here. try a few of these: endurance runs on a treadmill at average course grade, speed work at greater cadence than normal, develop your fast hike/walking movement, do bounding movement on steep hill repeats,

On the uphills its NOSE BEFORE TOES and EARN 7Rsw2THE DOWNHILL!!