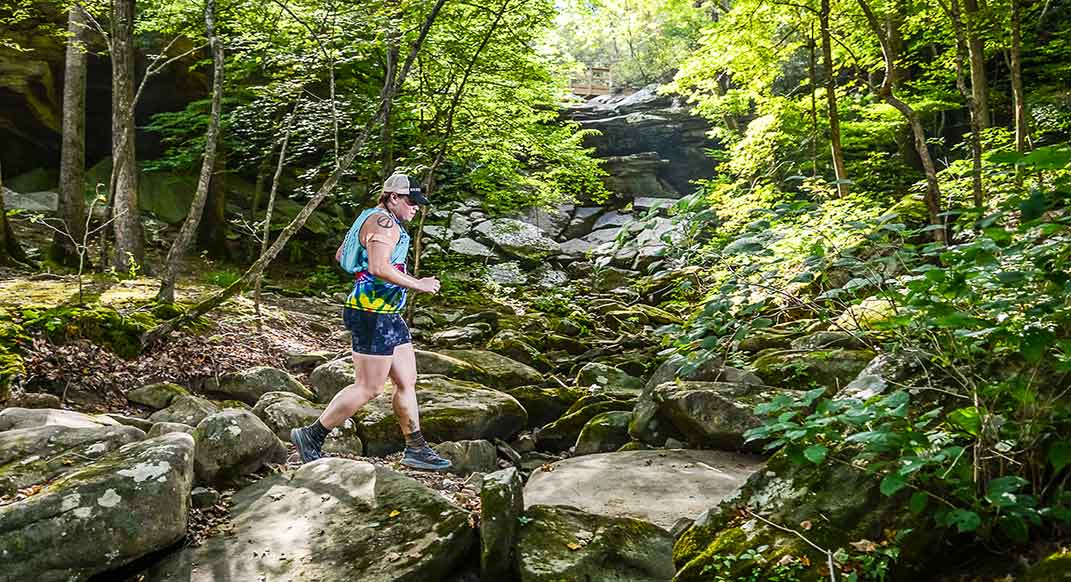 When people say, “Anything is possible,” they don’t truly mean anything. Some things are not going to happen anytime soon: a dog won’t win the National Spelling Bee and I won’t win a gold medal in rhythmic gymnastics. If I were writing this article on June 28, 2016, I could probably have added another thing to that list: Alyssa Schmidt wouldn’t win her age group in a trail 100K in just over a year of running.

You see, up to that point, Schmidt, 29, of Sioux Falls, South Dakota, had never run a mile. “I was the girl who walked the mile every year in school,” Schmidt says. “I wouldn’t run for anything.”

Finding Herself on the Trails

Growing up, Schmidt thought of running as something other people did. “I had been overweight my entire life and never athletically coordinated in competitive sports,” she says. “I specifically remember telling people how silly I thought running was.”

In her late 20s, around the time most people settle into the groove that they’ll occupy for the next few decades, Schmidt jumped off her track. “I lost 65 pounds and had so much extra energy,” Schmidt says. “I wanted to do some kind of physical activity, but I wasn’t sure what.”

On June 29, 2016, one of her coworkers convinced her to sign up for the Sioux Falls Half Marathon. That day, she did her first ever run.

It wasn’t particularly pleasant. She got a couple hundred meters before stopping for a walk break, and was sore for days afterward.

But, “It was like some switch had flipped inside of me,” she says. “As someone who didn’t have a lot of confidence, there was something about constantly pushing my boundaries and succeeding that made me feel so good.”

After a few months of running, she fortuitously discovered the trails. “I was just tired of running on the paved bike trail here in town,” she says. “I knew we had a couple of areas with hiking trails close by, so I went out one day and did my training run on them. I had to walk a lot, and my pace was slower, but it was an entirely different experience.”

On the trails, Schmidt found “a connection with nature and the universe that I’d never had before.”

Schmidt’s first months of training were structured around a Couch-to-5K online program, extending the long runs by a few miles. Once her legs had adapted, she progressed into a routine that generally looked like this:

In September 2016, using that amped-up Couch-to-5K strategy, she finished her half. She enjoyed the process of pushing her boundaries so much that she set her sights on a marathon two months later.

She went from four days of running per week to five, with short, easy runs during the week and a weekly long run on trails. Schmidt says “I definitely didn’t have too much of an idea what I was doing.” But it worked for her. In November 2016, she finished her first marathon.

Then, in December, using the same consistency-plus-long-run strategy, she finished seven minutes under the cutoff at a 50K to get her first ultra finish. “At the time, it was both the most miserable and most exhilarating experience of my life,” she says.

A month later, buoyed by continued consistency over the holidays, she signed up for Illinois’ Shawnee Hills 100K on August 26, 2017. The race would fall 425 days since she ran her first mile, and less than a year since she found her love of trail running.

She settled into a routine of running five days a week, totaling between 30 and 40 miles. Most weeks looked similar:

Schmidt peaked above 60 miles in a week, with most weeks around 40, and 90 percent of those miles slow and relaxed, plus a small amount of focused intensity.

On race day, she repeated her favorite mantra, “This sucks, and that’s OK,” and finished in 24 hours. On the brutal Shawnee Hills course, she was the only person in her age group—male or female—to finish. So, through belief and persistence (plus support from her crew), she won the 20-29 category outright.

“I learned that you never know your boundaries until you push them, and you never know your limits until you find them,” Schmidt says. “Never listen to someone when they tell you to be smaller than you know you can be. The confidence and self love that comes from the experience of constantly redefining my limits helps me to know myself better and appreciate things about myself that I never have before.”

Schmidt’s journey to 100K was about much more than mileage and training hours. It had a lot to do with mindset.

Every day, Schmidt repeated three mantras, which can help anyone embarking on the trail running journey.

First, she says, let yourself slow down. “The first two miles of every run, I feel like a newborn fawn. My legs have no idea how to work, things feel so unnatural and it’s almost as if I’ve never run a day in my life.” Schmidt overcomes those first-mile feels by taking it easy, emphasizing consistency over speed.

Second, she says, recover intelligently. “Nourish your body with good food and make time for your warm-up routine, foam rolling and whatever other things work for you.”

Finally, she says, “Give yourself grace.” Schmidt wrote this down and put it on her fridge, a constant reminder to be patient with her journey. “Realize that you may not hit every mile every time, and that’s OK,” she says. “Training is a process, not a test. We are constantly growing and pushing and sometimes we don’t take the time to realize how far we have come because we are so focused on where we are going.” 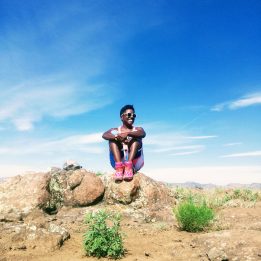 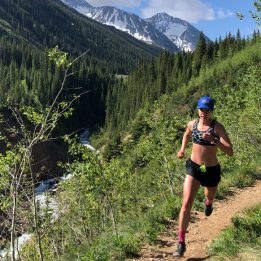 Training In Hot Conditions May Enhance Fitness And Performance 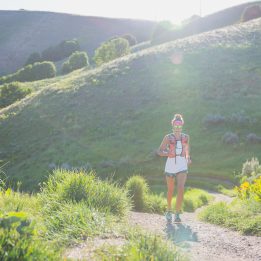 Just AMAZING! Thanks for sharing this inspirational story.

Thank you so much for the comment Michelle. A book could be written about Alyssa and it would just barely be able to do her story and life justice!

You are wonderful Keith, thank you!

Truly remarkable! What an inspiration!

Truly remarkable! What an inspiration!

Remarkable! What an inspiration!

So much love for your comments Chinyere! Thank you for reading!

“…we don’t take the time to realize how far we have come because we are so focused on where we are going.” Wisdom that applies to many areas of life.

So true Mike! Alyssa really lives these quotes too, it’s amazing to see and taught me a lot personally. You rock!

I found this so interesting. Couldn’t believe how little time between her beginning races! Just wondering if the last schedule was done all on trails or a mixture of trail and road.

Hi, Anne! My half marathon and full marathon were both on roads. I’ve done a few road half marathons for fun with friends, but almost all of my races have been on trails since then. The Shawnee Hills 100/100k/50 is in the Shawnee National Forest (southern IL) on technical, rocky trails. There’s actually a boulder scree on the course! If that’s your jam, I highly recommend checking it out! Thank you!

Now that I’m re-reading this, I’m worried I didn’t answer your question! As far as my training schedule, I run almost all of my miles on trails.

Wow, what an amazing person (male or female) and to find and focus on trail running that allowed her to navigate the meteoric rise of a sleeping champion is quite the journey. Kudos Alyssa! Very nice recounting too David.

Thanks for sharing this remarkable story. Alyssa’s three mantras are wise and resonate.

Brooke, her life approach has really rubbed off on me over time. You are great!

Made my day start off great! What a story and am happy to be a part of the happy trail runner group around the world. Thanks for the great story.

You are amazing Dave, thank you!

Thanks for sharing Alyssa’s story. Amazing and inspiring.

Thanks for sharing Alyssa’s story. Amazing and inspiring. It’s nice to hear about what the pros are doing, but stories like Alyssa’s really hit home.

Thanks so much, Susan!

I work in a running store in Sydney, Australia, and am going to tell my customers to read this story. Thanks, David, and all the best to Alyssa on her wonderful journey of personal discovery!

Its just so amazing to read a story similar to my journey from couch to 200 mile in one year.its an achievement of a lifetime!

How did I stumble on this article this time of morning? I had given up running, because of work demands. It’s 5:51am, this has inspired me to get up. Got my running shoes on, I’m out! Thank you.

Best story ever. The power of mental toughness, persistence and finding the good in struggle. Alyssa is the best of role models. A “normal” person achieving in extraordinary fashion. Additionally great, well written article

i really enjoyed this article and it has inspired me to progress with my training as well. i was just curious if the article is correct, than does that not make the Title misleading as it says from couch to 100km in 1 year. i am just wondering as it says “The race would fall 425 days since she ran her first mile, and less than a year since she found her love of trail running.”I am not taking away from the athlete as her achievements are amazing . Just as a beginner looking at what would be attainable safely in a given time frame. Again i am not trying to down play an achievement just inquiring into the actual time frame stated in the article vs. the title thank you. If i have misread this i do apologize. All in all i enjoyed this article and have found myself switching from runners world to following this much more. all the best ,