Three Strategies to Finish Fast In Your Next Trail Race

How to be “a closer” and surge toward the end of a race, without going overboard and bonking. 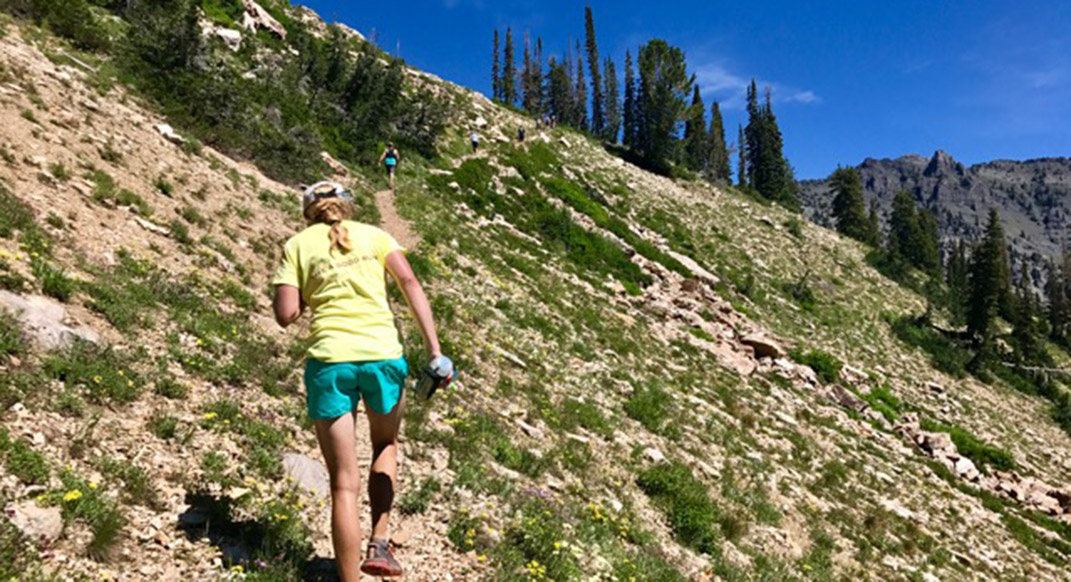 Around mile 22 of the Speedgoat 50K, held on July 29 in Utah’s rugged Wasatch Mountains, a woman in a yellow shirt pulled ahead of me and attacked a beastly climb at nearly 11,000 feet in elevation.

“She’s having a great race,” I thought to myself, as I watched from behind. “She’s a closer.”

The runner was Sarah McCloskey, 44, of Alta, Utah and she and I had been leapfrogging for the last 20 miles. Throughout, I had admired her just-right, focused and efficient pace. Then, in the final miles, McCloskey did what every runner hopes to do in a race: She surged and passed numerous others. She moved from around 20th female mid-race to 11th in a highly competitive field, ultimately finishing in a time of 8:30.

Approaching the finish, “every person I passed increased my motivation to push harder,” McCloskey says.

How can you be “a closer” like McCloskey, without “sandbagging”—that is, deliberately running too easily early in the race and performing below your potential?

Try the following strategies in your next race to pace properly, avoid mistakes, handle challenges and finish strong with your best possible time.

1. Study the course and practice its final portion in training.

When Tim Tollefson trained for the 2016 Ultra-Trail du Mont-Blanc—his first 100-mile race—he studied the course and focused on the route’s final portion, which features a sharp plunge downhill followed by a long, flat stretch to the finish. Tollefson found a downhill-to-flat route in his hometown of Mammoth Lakes, California, and he practiced it repeatedly.

When Tollefson reached that point near the end of UTMB last year, he felt confident he could run all-out. “I was like, ‘Man, this is exactly what I prepared for,’” he recalls. He ultimately accelerated to a third-place finish. (Tollefson is heading back to compete at UTMB again in late August.)

McCloskey also benefitted from intimate course knowledge at the Speedgoat 50K, having run it nine times prior. Unlike many others in the field, she did not feel surprised or discouraged upon encountering a tough hill followed by a steep, technical descent in the final five miles.

2. Divide your race into thirds to pace and manage your needs in each phase.

Besides studying the course and training specifically for it, finishing fast on race day takes proper pacing and self-care. To effectively pace a trail race of any distance and manage your systems along the way, it helps to break the distance roughly into thirds: the beginning, middle and end.

Like a story, a trail race starts with an introduction that sets the scene and establishes a rhythm and tone; a middle that delivers dramatic challenges and unexpected developments; and a conclusion that features an exciting climax and resolution. Dividing your race into these distinct phases will help you manage your pace as well as your physical and mental well being.

In the beginning, don’t race others; check your ego and run a steady, sustainable pace that feels right for you.

Both at last year’s UTMB as well as last month’s Speedgoat 50K, Tollefson downshifted to hiking in the early miles when running felt stressful or unsustainable. At Speedgoat, this allowed his competitors to build an early lead. However, it also enabled Tollefson to finish fast and place second behind course-record breaker Jim Walmsley.

“That perfect starting pace will differ for each runner based on personal goals,” Tollefson says. “I find it helpful to listen to intrinsic cues the body will provide you.” He likens the body’s natural cues to a car’s tachometer, which tells the driver if he or she is revving too hard.

“Breathing, heart rate and amount of ‘burn’ in the legs can do the same for us,” he says. “If I can’t control my breathing to a smooth pattern, or if my legs are starting to burn with increasing intensity, I’ll consider backing off a gear or two until I can restore a more homeostatic or comfortable pace.”

In the middle, troubleshoot challenges, stay positive and take care of yourself.

The middle portion of a race often becomes a grind. Fatigue, doubt, boredom and other negative feelings creep in. Unforeseen problems—such as stormy weather, gear malfunctions, blisters—challenge you to troubleshoot and work through a rough patch.

Deliberately maintain the optimism, efficiency and steady pace you practiced from the start. Adequately refuel, rehydrate and regulate your body’s temperature (cooling off in heat, staying warm with extra layers in the cold), even if this means taking a little extra time for breaks.

Running close to others can help make these middle miles pass by smoothly. Instead of viewing other runners as adversaries, view them as friends who help pull you along. As long as their pace doesn’t cause you to increase your effort level to an unsustainable level, run with them and enjoy their company. But, let them go ahead when you need to slow down for refueling or other self-care.

McCloskey, for example, would let other runners get ahead when she paused in the warm canyons to wet her hat and arms at stream crossings, or when she pulled food out of her pockets to ingest the 200 calories she had decided to eat each hour. Then she’d catch back up.

“Stick to a plan to avoid bonking,” she says. “So you can accelerate in the latter part of the race.”

Toward the end, push increasingly hard—but not too fast, too soon.

The final third of the race is the time to dig deep, push hard and strive to pass others. This is potentially the most satisfying, or most crushing and painful, part of racing. Push hard—but not too much, too soon, or a severe bonk could make you seize up before you see the finishing chute. In the 2016 UTMB, Tollefson almost fell into that trap when he started racing another competitor toward the end.

“I started battling it out with a guy I had just passed, and he passed me back, and I realized that if I battle with him now, I’m not going to make it to the finish line. I’m gonna blow a gasket,” he says. “So at that point, I consciously let him go”—and eventually reeled him back in and passed him before the finish.

Toward the end, your energy and spirits may sag if you realize you’re too far behind to catch a competitor. You lose interest in performing your best; instead, you just want to be done, and your run devolves into a slog.

At that moment, make a pact with yourself to stay strong and race the clock for your best possible time, regardless of where you are relative to other competitors. You may surprise yourself and finish farther ahead in the field than expected.

“Keep pushing until the finish, no matter how poorly you think you’re doing, because it’s not over until it’s over,” says McCloskey, recalling how she won the Bighorn 100-Mile Trail Run in 2013, after assuming she’d finish third or fourth. “All the other women ahead dropped, and I was in the lead. Never give up!”

Sarah Lavender Smith is a coach, a contributing editor for Trail Runner, and the author of The Trail Runner’s Companion: A Step-by-Step Guide to Trail Running and Racing, from 5Ks to Ultras.

Great piece, Sarah, will keep Tim’s tips in mind at UTMB in 3 weeks too! You definitely get a boost when passing people at the end, and the contrary otherwise. Overall, a more competitive strategy than the funny old ultra pacing adage: “Start slow, then slow down!” 😉 A small typo in the first section: third-place finish (although it could also have been is third pace since you recommend to decompose the race/course in thirds).

Thanks Jean & whoops, thanks for pointing out the typo! Best of luck to you at UTMB & congrats on continuing your Skyline streak.