Running 100 miles may seem impossible. Here’s how to make it attainable. 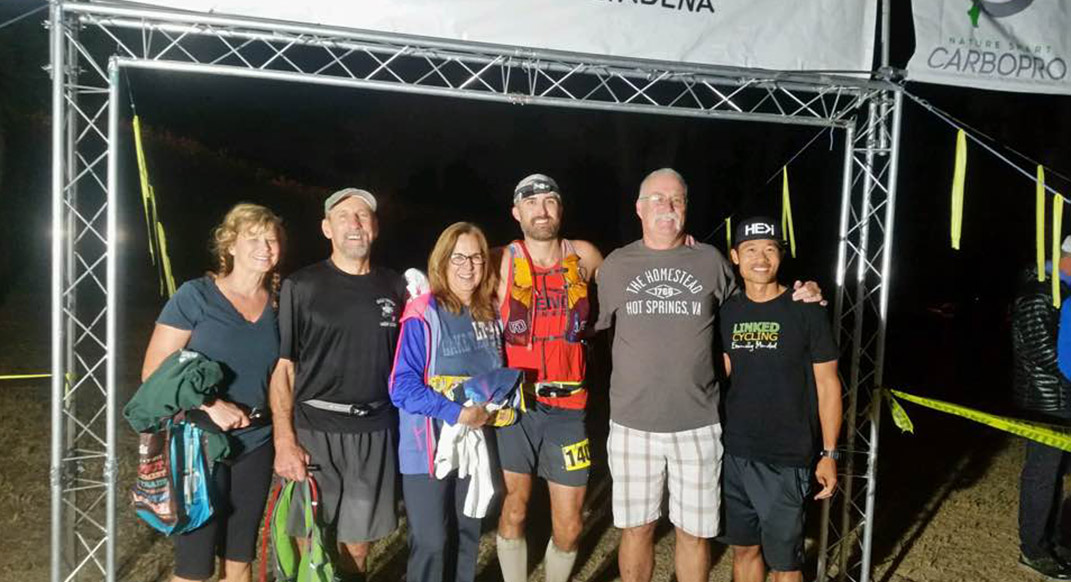 Kyle Fulmer with his team of supporters after finishing ninth at the Angeles Crest 100. Photo by Diana Fulmer.

To people uninitiated in the ultrarunning world, 100-mile runs lie somewhere between incredible and unfathomable. But, when normal people start making the transition to longer days on trails, 100 miles starts to seem less crazy. Eventually, it might even begin to seem normal.

The truth is that it’s not impossible for a normal person to run 100 miles. While an extraordinary achievement, 100-mile finishes are more about strategic training, long-term planning and desire than about genetic talent.

However, it’s daunting to start the 100-mile journey. Here is one way to approach 100 miles, even if it seems a bit unthinkable when you get started.

From couch to trails to 100-mile breakthroughs

In December 2016, Kyle Fulmer, a 36-year-old logistics and sales manager from Fullerton, California, laid out an audacious goal: he wanted to finish the Angeles Crest 100 in under 24 hours.

Like many trail runners, he had been running seriously for just a few years, averaging 30 to 50 miles per week in training, with peaks above that on key training weeks (sometimes over 100 miles) and race weeks. His training mostly revolved around extra-long runs every other week, sometimes up to 40 miles with local trail groups. He didn’t do too many intense workouts, instead focusing on lots of time on his feet during long runs. His best 100-mile result had been 23:47 at the 2016 San Diego 100. The Angeles Crest 100 is a far more difficult course, with a median finishing time about two hours slower than San Diego. His sub-24 goal would require a different kind of training.

Kyle shares a lot of traits with a lot of other trail runners. He is strong, but not a 120-pound mountain goat (6’3” and 190 pounds). He is talented, but wasn’t winning the mile race in middle school (his flat 50K PR is 4:35, equating to about a 3:40 marathon). Most importantly, he is motivated, but not single-minded (he is a loving husband with a busy job). So we focused on three simple elements in training: weekly workouts, long runs and practice races.

With nine months to build toward Angeles Crest, Kyle first focused on short, fast workouts that would help him improve running economy, or reduce the amount of energy it takes for him to run at a given pace. In addition to twice-weekly strides, he did once-weekly short intervals with long rest. For example: 12 x 1 minute fast (around 5K effort)/2 minutes easy, 10 x 2 minutes fast/90 seconds easy and 8 x 3 minutes fast/2 minute easy. Over time, the workouts built upon each other until Kyle was running 5K and 10K PRs during training tempo runs. While there are 32.18 5Ks in a 100-mile race, that newfound running economy would allow him to run faster for longer during more specific training later.

Throughout the rest of the training cycle, Kyle continued to improve his running economy with strides and intervals, in addition to mixing in short hill workouts (i.e. 5 x 3 minute hills hard) and lactate threshold tempo runs between 20 and 40 minutes.

When you are preparing for ultramarathons, never lose sight of the fact that performance at all distances is built on a foundation of solid running economy (or what many people would call ‘speed’). Improve your 5K with short intervals, and you’ll improve your ultra performances when you add long-run strength to the mix later.

Since Kyle had already gotten very good at long slogs in his previous training, he deemphasized long runs early on. In addition to the strides and intervals, he capped long runs at 16 miles until training for ultra races formally began in late spring.

Once spring rolled around, his long runs were based on three principles:

3. Many normal runners can get the most bang for their buck by doing just three to six runs over 20 miles during training to avoid injuries and burnout.

The weekdays were filled in with three runs between six-10 miles with a short weekly workout and twice-weekly strides. In sum, Kyle’s average weekly long run was 21 miles, but with peaks for races and valleys for taper and recovery. The variation in long-run stress allowed him to get lots of adaptations with shorter average long runs than he had used in the past. The races were a place to lay it on the line and practice a few steps before the big dance at Angeles Crest.

When you are planning out long runs, you don’t have to run 30-plus miles all the time to be ready for a breakthrough 100. Instead, focus on one longer training race, consistent moderate runs around 20 miles and a few runs over 20 miles where you practice fueling and hydration for race day. A good general rule is to finish most “easy” long runs feeling like you could go do it again and “moderate” long runs feeling like you are ready for a shower beer.

Putting it All Together

While Kyle’s training build shows one method for training for a breakthrough 100-mile race, there are many others. The key takeaway is to focus on running economy, and to realize that you don’t have to run crazy long all the time to run crazy long on race day.

In a 100-mile race, the going will always get tough and stuff will always hit the fan. Get ready physically with smart, patient training, and you’ll be ready to put the mental muscle to the test when it counts.

Great article again. Just got back from AC also and saw Kyle on the course looking solid. My training was a mixture of short-ish trail slogs in the heat, stroller running and elliptical work. Mostly around 40mpw to keep injuries at bay and maintain family balance. For long runs, I raced a 100k in February, 50mi in April, and a 50k at the beginning of May followed by a fast road marathon at the end of May. From June onwards, I raced a few road and trail half-marathons and implemented “casual” up tempo work to keep the speed. Only one… Read more »

Amazing race! You are a fantastic person and role model for other runners!

Rachel you are an amazing runner! Your daughter at the finish line with the flowers was the cutest thing ever! And your kids at the finish line photo were so adorable….absolutely made my day seeing that…I have seen you crush so many races and am always in awe of how easy you make it look! Congrats on the win!

Thanks for telling your story, Rachel! I can relate, and it’s so much easier to think about running 100 when hearing success stories like yours. Congrats!!!!

Your amazing Rachel Ragona! Saw you in action at AC100 and also Leona divide and yes I saw you full on hands with your little ones, I totally have much respect you really know how to balance your life. Congrats on all your accomplishments..

What exercises did you do for strength? Any PT work?

I enjoyed the article very much! But, I kept looking for his “couch to 100 mile” portion of the article. It went from the paragraphs header of “Coucb To Trails too a 100 Mile Breakthrough”. An amazing feat indeed, but it doesn’t help a couch potato ex Ironman Athlete begin to prepare for their first trail ultra. But thanks for the encouragement and motivation, as well as the training schedule once I get past the couch potato to 5K portion.

The couch was when the running journey started in 2012, sorry for not making that clear!

I agree. I’ve done 50Ms, but DNF-ed my only 100M attempt. I want to make the transition and was looking for a training plan for that. Improving your 100M time is impressive, but a very different plan than finishing your first.

Were all of the long runs done on single track? What about week day runs? I’m coming back from a fall on trails that left me with a small fracture of the femoral condyle. I was off for about 15 weeks from any real running and am just beginning to build miles. I’m hoping to get back on track to run a 100K in mid Oct (all single track) and a 100 miler 1st weekend of December (mix of single and double track). I often run by time rather than distance for long runs as well. I suppose I could… Read more »

I like your definitions for easy vs moderate runs. That’s something that has been tricky for me to define as a relatively newer distance runner. Also, what’s more motivating that a shower beer?! Thanks, Coach!

Great tips and perspective on training for a 100. Got a few questions…

On the weekends where you aren’t doing back to back long runs (eg Week 13) are you still running the other day of the weekend but a shorter run? Or is it just an extra rest day?

Weeks 10 and 7 seem like recovery weeks after harder efforts. How do you gauge how much (or little) to run to recover enough but not lose any significant fitness that you’ve achieved through training?

Finally, is tapering for a 100 any different from other distances?

I don’t know if anyone is still out there to answer a question about this training plan but I was wondering if im reading it correctly. Are you running 4 to 5 days a week with the Strides and weekly workouts done during midweek?