Running at night isn’t as scary as you’d think

It was three o’clock in the morning in rural northeast Kansas and, watching two steadily moving lights bobbing on the black horizon … 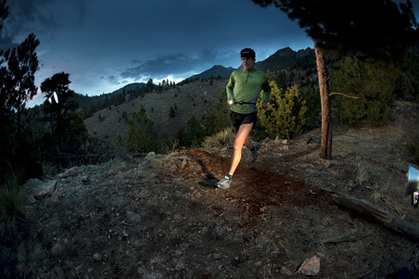 It was three o’clock in the morning in rural northeast Kansas and, watching two steadily moving lights bobbing on the black horizon, I wondered, “How many UFO sightings are actually just ultrarunners cutting a path through the darkness?”

The two lights belonged to a couple of weary friends making their way around the five-mile loop of the Nathaniel’s Run Ultra on the Prairie Center Trail just outside Olathe, Kansas. Running trails at night is a skill developed primarily through repetition and experience, but you can get a jumpstart by listening to runners who have already spent many a sleepless hour in the dark.

Kansas City Trail Nerds members Ben Holmes and Gary Henry are two such runners. Holmes, also known as “Bad Ben” for his penchant for both microbrews and running, has completed countless ultramarathons across the country and is the father of the Trail Nerds, which is several hundred runners strong and hosts virtually all of the trail races in the Kansas City Metropolitan Area. He says there is something special about the Trail Nerds’ five-times-a-week night runs. Gary Henry, whose sense of humor seems to grow in proportion to the amount of suffering he’s enduring, agrees.

“I enjoy night runs because of the 180-degree contrast to day runs,” says Holmes. “You can just focus on the tunnel of light ahead of you, and run as fast as your legs and lungs allow. It’s the best way to obtain `trail feel,’ like you are a part of the trail.”

Until you get that feel, Henry recommends taking precautions. “Keep your steps high,” he says. “Even with lights, those trip hazards are hard to see. Some runners like to carry a handheld flashlight in addition to a headlamp, but I never found it helped and like to keep my hands free to break falls.”

Holmes, however, prefers using both a handheld and a headlamp. “A handheld needs to be held low and parallel to the ground, so it casts a shadow to show the height of trail obstacles,” he says. “It’s amazing how fast you can run at night using this technique. And I set my headlamp on `low, broad beam’ to best see trail markers and low-hanging branches.”

But even with proper lighting, Holmes says the most essential tool is your own power of concentration. “Focus, focus, focus. Keep your eyes on the trail,” he says. “If you look anywhere other than straight ahead, you’ll go down.”

“Night running reincarnates your primordial id and brings out your fight-or-flight instincts,” says Holmes. “Occasionally, you’ll have adrenaline-producing wildlife encounters, for example, spooking a flock of giant flapping wild turkeys off the roost.”

Henry recalls a nighttime scare during Colorado’s Leadville Trail 100: “Just a few minutes into the run I noticed several pairs of green, glowing eyes peering at me. I was sure I was going to be dragged down and devoured by a mountain lion. Then, at first light, I saw the eyes belonged to deer.”

Odds are that the inanimate objects—rocks, roots and even fallen hedge apples—will do you the most harm (Henry recommends wearing shoes with good toe protection). But there are occasions when you’ll encounter exactly what you fear. Holmes recalls during Washington’s 2007 Cascade Crest 100, “I spotted something moving to my left. It was a huge black bear, staring at me and my bright set of lights. All I could muster was a muffled `hi,’ whereupon he sauntered back into the woods.”

Henry also advises that you run with a group, at least when you’re learning. Not only is it safer in case of an injury, it gives you more confidence. “And start on an easy, familiar trail,” he adds. “Always tell someone where you’re going to be, and, above all, enjoy the spooky strangeness!” 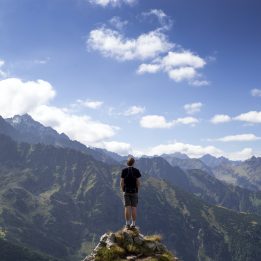