Map and Compass Navigation Is An Essential Trail-Running Skill

You can't always rely on your phone apps for directions. 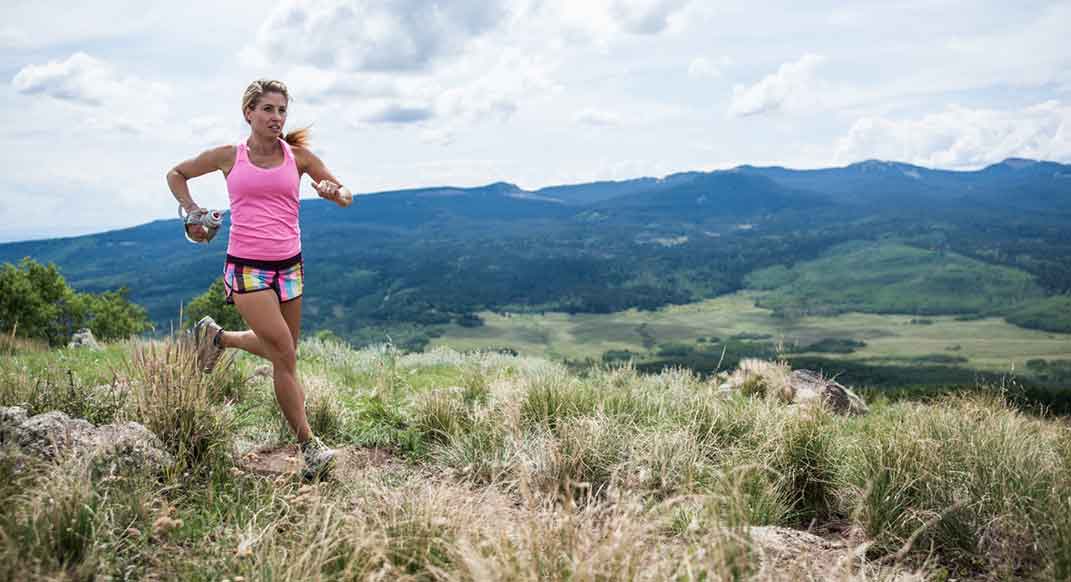 A trail buddy and I ran through lush layers of green on Tiger Mountain outside of Seattle, winding through a rainy forest on cushy pine-needle trails. As we labored uphill, rain turned to snow. At first it was enthralling, as it coated ferns like sugar, but soon it began to fall heavier, obscuring the singletrack.

At each trail junction, we checked the route I’d mapped on Strava and printed out with cues, but somewhere we veered off track. We ran-walked back and forth on a stretch of trail, from one unfamiliar junction to another, debating where we were and where we should go. Without cell service, I lacked a blue location circle on Google Maps; in the cold, my friend’s phone battery drained precipitously.

As our hands numbed in the freezing air, twilight fell and our time-on-feet  surpassed our fitness levels, I realized I lacked the navigation skills and tools that any self-respecting trail runner should have.

Luckily, a trail angel appeared around a turn and kindly lead us to the trailhead. The next day, I signed up for a map-and-compass course.

Nowadays, trail runners have a plethora of digital navigation tools literally at their fingertips, via apps like Gaia and Strava, which offer downloadable map and GPS capabilities. But smartphones are often useless in the backcountry: Batteries die, screens break, cell signals fade.

Ladia Albertson-Junkans, winner of the 2017 Chuckanut 50K and the top U.S. finisher at the Trail World Championships, carries a compass and topo maps on long, remote runs. “It’s so easy to miss a turn or get confused, especially if there are a lot of intersecting spur or social trails,” she says.

Here are some basic map and compass skills every trail runner should have.

What is a topo map?

Topographic maps show what simple trail maps lack: geographic features, such as altitude and grade, which are denoted by contour lines that connect all points at a given elevation. Dense (i.e. close-together) contour lines indicate steep terrain; when contour lines are spread out, the terrain is more gradual. Look for concentric rounds to find, say, a mountaintop. Thicker index lines include elevation.

Not all maps show the same level of detail—some show more information about a smaller area, while othes show less information about a greater area. Scale is the ratio of paper-map space to real-life space. Every topo map has a legend, a key to decoding various map symbols, including lines, colors, contour intervals and—this is important—magnetic north. (We’ll come back to that.)

How to read a topo map.

While looking at the map, picture the terrain as if you were running. Identify landmarks and terrain features that will help you reach your destination. A great example is following a river upstream to a trail junction. Also practice identifying features or distance markers beyond your destination, which signal that you’ve overshot your mark.

While on the trail, keep your eyes peeled. “Know what should be coming up. Look for clues,” says Lisa Jhung, trail runner and author of Trailhead: The Dirt On All Things Trail Running. “It’s a good idea to look over your shoulder at key trail junctions to see what the turn will look like coming back.”

What is a compass?

A compass should include a clear baseplate with a straight-edge ruler along one side, and a 360-degree rotating bezel. It should also have three arrows: a direction of travel arrow (printed on the baseplate), an orienting arrow (printed inside the bezel) and a magnetized arrow that floats around and points north.

But, because of the molten (i.e. moving) consistency of the earth’s core, geographic north—also called “true north,” the point denoted on the top of your map and compass—dffers from magnetic north—the point your compass needle actually swivels to. The difference between true north and magnetic north, called declination, changes based on where you are in the world.

For example, in Seattle, the declination is 20 degrees east—that is, magnetic north is 20 degrees further east than true north. Check National Ocean and Atmospheric Administration’s site to find your local declination. Your compass should include a declination adjustment, which allows you to set your bezel to account for a specific declination.

How to use a map and compass to roughly orient yourself

The most basic rule of using a topo map: “Hold it so that it’s facing the right direction,” says Jhung. If you don’t recognize where you are, this can be surprisingly difficult. Here’s how to use your compass to orient your map in the right direction.

If you want to figure out what direction to go to get to your destination, you need to take a bearing—a direction identified in degrees. From north, in a clockwise direction, the compass identifies east (90 degrees), south (180 degrees) and west (270 degrees). If you get turned around, recite “Never Eat Shredded Wheat” while pointing clockwise at each quarter hour to remember which direction is which.

“Learning how to shoot bearings is scientific. But it’s handy,” says Jhung.

If you can point to where you are and where you want to go on a map, but can’t see your intended destination in the real world, you can take a map bearing to figure out what direction to run.

Once you’ve found your bearing on the map, it’s time to apply that reading to the field.

If you can see a destination or landmark in the real world, but don’t know where you are, take a field bearing.

This strategy is helpful for figuring out how far along a route you’ve gone, or identifying prominent but unknown landmarks. Elinor Fish, founder of Run Wild Retreats + Wellness, uses this technique on group runs all over the world. “When it’s a trail I’m not familiar with, I’ll check our progress and orientation as we go, for reassurance and also to tell the group where we are,” says Fish. “The danger with running is you just want to make progress. You don’t want to break stride or momentum. But when you don’t do that, you can get off track.”

To find a field bearing:

Once you’ve taken a field bearing, transfer that bearing to the map, to either confirm that the landmark you see is the one you think it is or to figure out where you are currently along the trail. (If you are off-trail, jump ahead).

If you’ve wandered off-trail, or don’t have another linear feature to work with, you can use triangulation to narrow down your location on the map.

“Don’t talk yourself into something that isn’t there,” says Jhung, an avid trail runner and former adventure racer. “I’ve been up the wrong 9,000-foot mountain, looking at the [correct] checkpoint on another peak, and down the wrong valley in the middle of the night.” When lost, she says, “You have to backtrack to where you know you are on the map.”

To gain proficiency in map and compass use, it’s a good idea to take a class (offered at outfitters like REI). There’s no better way to learn than to practice under the instruction of a certified guide.

For more on trail navigation, visit the “safety and navigation” chapter of our new online how-to guide, How to Trail Run.