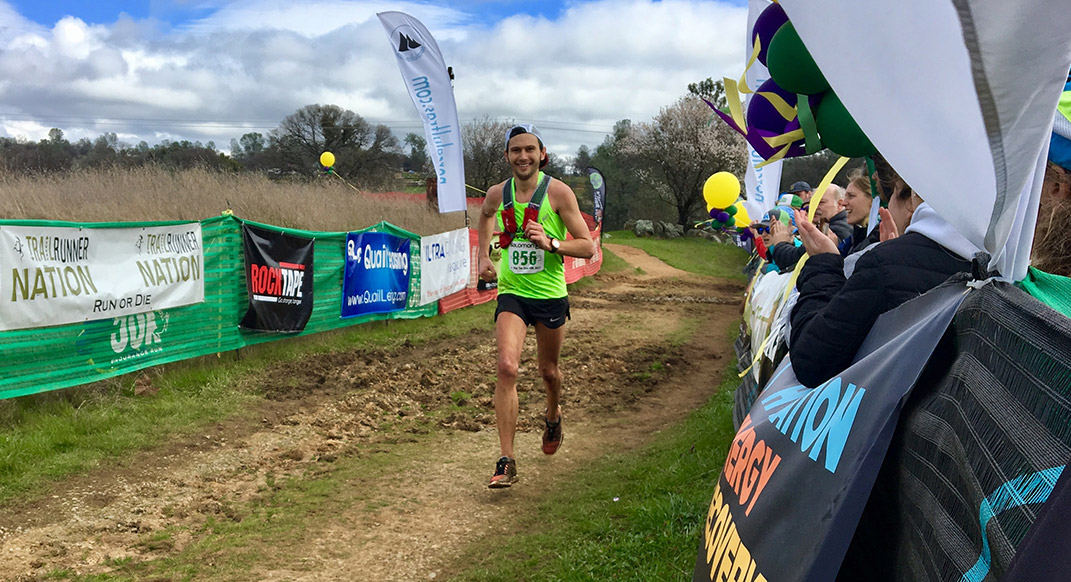 Scott Trummer finishing 3rd with a smile at the 2017 Way Too Cool 50K. Photo by David Roche

In the final, steep mile of the historic American River 50 Miler, most runners are more like zombies than people. Suffering in the midday sun with the finish line hundreds of feet away, they stumble and groan.

But last Saturday, Scott Trummer, was bounding up that hill smiling, encouraging fellow runners and thanking every spectator as he passed. Minutes later, he ran to a first-place finish.

Scott, 25, of Livermore, California trains his butt off. But that doesn’t mean he takes himself—or his running—too seriously. That approach has helped transform him into one of the foremost up-and-coming stars in trail running.

Here are 4 mental keys to his success.

Learn to love the monotonous and the mundane.

Running training is not glamorous. It involves many hours of repetitive activities over many days over many weeks over many years—so long that what was hard becomes easy. If you don’t love the routine, your brain will consume itself from the inside out during high-volume training.

Due to his work schedule, Scott does most of his weekday running at night on a bike path near his home. He usually turns left, logging around 15 miles per day on a stretch of pavement and dirt that provides no stimulation beyond the occasional sunset. Then, one day, he changed it up. In his training log that night, he wrote, “Bike path RIGHT! It was new and glorious.”

In your own training: Constantly remind yourself that running is a privilege requiring health and vitality, and that you should never take it for granted, even when it’s yet another day of your personal “bike path left.”

Don’t overreact to the ups and downs of training.

If you run long enough, you will experience the highest highs and the lowest lows. You will set PRs at every distance, and you will get injured more times than you can count. In the face of a rollercoaster sport, your long-term development depends on your ability to never get discouraged.

While training for American River, Scott went through the normal ebbs and flows. He had an injury scare, and took five days off without getting depressed. He took a wrong turn at the Way Too Cool 50K (eventually finishing 3rd), but he had shaken it off by the time he reached the post-race beer tent. Most importantly, despite his good training (including 26.2 miles at 5:52 average pace, two weeks before American River), he never let his expectations get overinflated.

In your own training: Zoom out and think long-term. When you have a great workout, a bad workout or an injury, remind yourself that it won’t make much of a difference in three years. Trail running is a life-long sport, and those little fluctuations all get smoothed over with time.

Happiness is a performance-enhancing emotion, and a joyful approach to running should be trained right alongside VO2 max.

Before the race, Scott texted me: “I am just going to run my butt off, smile my cheeks off, and see what happens.”

In your own training: Smile more. That seems simplistic, but it works. If you resolve every day to smile and laugh during runs, and to encourage joy to well up inside you at every opportunity, it gets more natural over time. The happier you are, the more you’ll believe in the process, and the faster you’ll run.

Remember that the universe doesn’t care

Before a big race, I tell my athletes: “We are stardust with delusions of grandeur. None of this stuff matters, except the memories we make. So decide now that they will be good memories no matter how the race actually goes.”

The body can do incredible things when the mind decides not to care too much.

It’s nearly impossible to get Scott to accept praise, because he doesn’t think his running is that important to the world. Five minutes after he finished the American River 50, he called me and said, “I love Jen [Gates, his fiancé] so much that she made the day perfect and memorable.” Even in the afterglow of 50 miles, he understood that his run would fade into oblivion and was ultimately less important than his race crew Jen, with whom he’d be braving the universe forever.

In your own training: Write down what matters to you long-term, and post it on the fridge or at your desk. Look at it every day, internalize it and gain power from the relatively insignificant nature of how a race or training run goes in the big scheme of things.

If I had to bet, I’d lay money on Scott taking the trail running world by storm over the next few years. But, as Scott will probably tell me when he reads this, it’s not about training times and race results. It’s about loving the process of running and life.

David Roche runs for HOKA One One and NATHAN, and works with runners of all abilities (including Scott) through his coaching service, Some Work, All Play.

“…decide now that they will be good memories no matter how the race actually goes.”

Yes! Plan to be positive. Plan to live positively.
Be positive…running, living, loving and life!

Fantastic article! I might just post this on my fridge or desk! In my last two races this past fall I had a couple of significant PRs in races I had run multiple times (and I was 42). The biggest difference in my training was focusing more on the joy and the privilege of being able to run just about every day. David, you have a gift of verbalizing so many different training ideas, both practical and conceptual, in a clear manner. It really helps us amateurs implement methods and thoughts into our training that result in real improvement (even in our “master” years). Thanks so much!

Mark, you are the best person ever and I might hang your comment on my fridge or desk 🙂

Thx David, excellent article well written and described. I’d only add in the post run beer to nearly every workout! I find IPA cuts the muscle soreness at least in half (maybe it’s the hops, maybe not) either way we must strive to seal in the positive after each run, instructing our subconscious to do it again and again.

Hahahahahah, train yourself like a puppy, but with beer! Love that!

I have a clicker as well, but beer usually does the trick.

Another fantastic article-you nailed it once again and congrats to Scott! I wanted to share this passage I heard recently and think it might resonate with the trail running community.
“We rejoice in our sufferings, knowing that suffering produces endurance and endurance produces character and character produces hope and hope does not put us to shame.

Life is suffering if you zoom out far enough, that’s for sure! But smiling on the way down is definitely the best way to pass the time 🙂 You rock!

Wow! Beautiful article! This is a powerful message: “We are stardust with delusions of grandeur. None of this stuff matters, except the memories we make. So decide now that they will be good memories no matter how the race actually goes.”. Thank you!

Thank YOU! You rock Mauricio!

Bike path right, indeed. I do this all the time with my standard daily routes. It’s amazing how much it changes things.

“…running is a privilege requiring health and vitality, and that you should never take it for granted.”

I really like this article! I just started running with my school (indoor, outdoor, and cross country) and it’s been really hard for me to get motivated. I’m the only new distance girl on the team, and all the other girls are state champions or well on their way. I really love running and trail running, but when I’m far behind the rest of the team, or finishing with a slow time, it can be discouraging. This advice, especially running with joy, is something I’ll definitely use during practice or on the trails when I feel down or I feel like I’m running slow. Thank you so much!