Racing can take a big toll on the body. Make sure you don't come back too soon. 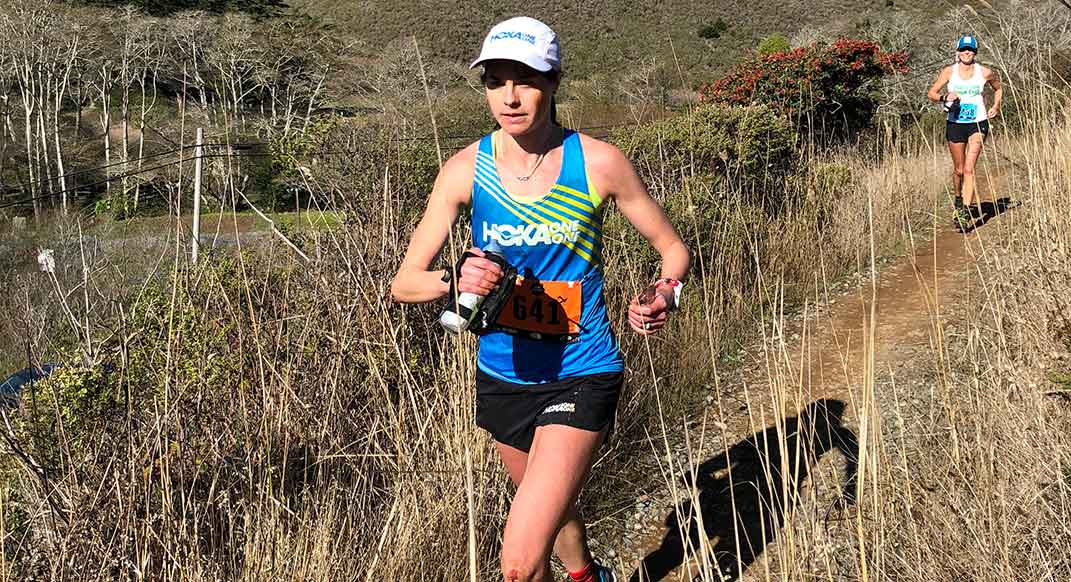 Megan Roche on her way to a fourth-place finish at the 2017 North Face 50 Mile Championship. Photo by Brigitte Bradford.

Chances are you have a horror story to tell about post-race recovery. It could be from your own experience, from a friend, or even an urban legend about the ultrarunner that couldn’t sleep for eight days. The unifying plot point is that recovery didn’t go as planned, and bad things ensued.

“Bad things” is intentionally vague and mysterious, like any good horror-story monster. However, pre- and post-race blood testing allows us to peek under the bed and see what lurks.

Based on tests taken by several athletes I coach, here are two main systemic consequences of hard races, and tips for how to make sure they don’t derail your progress.

Stress plays a large role in how the body modulates hormone production. Sometimes, that stress can be mental, like a looming work deadline. Other times, it can be physical, like a long race or lack of sleep. Either way, stress is stress, and it can wreak havoc on hormones.

After the Boston Marathon, Inside Tracker’s Jonathan Levitt chronicled a 700-point drop in testosterone levels. For him, that was more than a 50-percent decrease. Women can experience variation in sex hormones as well. Some variation is part of a natural cycle, but you cannot be too careful. When hormones get out of whack, everything can feel “off,” from worse sleep to reduced energy.

Additionally, the stress hormone cortisol often skyrockets after a tough race. At its worst, chronically elevated cortisol can contribute to the numerous maladies broadly characterized as overtraining syndrome (OTS). Anecdotally, OTS seems to come on most often after multiple hard races without complete recovery.

When muscles are damaged, your body releases creatine kinase. The normal level is 22 to 198 units per liter. I have seen levels in the four figures after a trail race with downhills, which involve lots of eccentric muscle contractions and, thus, high levels of muscle damage.

If you are seeing a doctor after a race, make sure he or she knows that you just raced, otherwise (s)he may panic at your blood-test results.

After a race, you may also experience full-body inflammation, which can be measured by C-reactive protein. After he ran Boston, Levitt’s levels rose over 400 percent. The body is damaged and inflamed, like a full-body sprained ankle.

Countless other systemic variables not covered here can get thrown off as well, including those related to the thyroid. And they don’t recover over night. After a particularly hard effort, the body can seem to play catch-up for up to a couple weeks, even with complete rest. In addition, risk of musculo-skeletal injuries can be higher after a hard effort.

While lots can go wrong, there is no hard-and-fast timeline for everyone to follow in order to properly recover. Blood tests indicate that every athlete responds to race stress differently. One athlete might even respond to the same stress in entirely new ways. Here are some guidelines to begin developing your recovery plan.

1. Consider one day of complete rest for every 10 miles raced

I first heard this piece of conventional ultramarathon wisdom from Pam Smith, a long-time ultra champ. Top coach Joe Uhan adds that if a race has more than 150 feet of vertical gain per mile, you may want to take one day off for every 10K raced. The theory is that inflammation and stress take time to fully resolve, and it’s not always easy to tell when it’s okay to start running again. Because any amount of running could exacerbate the issues, it’s better to be overly cautious.

When developing your rest guideline, round up. By this logic, a marathon requires at least three days off entirely and a half marathon two days off; a 100-miler would require a week and a half off. However, this is just an estimation—experienced athletes often find they need more (and sometimes less) rest, especially for longer ultras.

For example, after winning the 2017 Western States 100 on June 24, Cat Bradley did not run until July 11. Instead, she did some light biking, hiking and swimming to stay sane and keep her blood flowing. Cat had an amazing season thereafter, culminating in the Grand Canyon Rim-to-Rim-to-Rim FKT. When in doubt, err on the side of more rest.

2. Wait to jump into training until you are 100-percent healthy and craving it

The problem with post-race recovery is that it’s not always easy to see the damage. If you turn your ankle, you can wait until the bruising goes away. But if your hormone profile is off, there are rarely telltale signs to look for.

To combat the mystery of systemic inflammation and burnout, pay close attention to how your body feels in everyday life. Changes in sleep, mood, sex drive and almost anything else can be a sign of some lingering need for physical or mental recovery. At the same time, if you are dealing with a musculo-skeletal injury, wait to run until it feels good again. The body is vulnerable after a race, and rushing back for some short-term running joy can negatively impact long-term running potential.

Instead of training, take a page from Bradley’s book: hike, swim or do nothing at all—whatever, you want while staying below aerobic threshold, which limits stress.

Here, “pro” does not mean professional runner, but professional eater. While you never want to be a glutton, the body will be looking for lots of fuel to aid the rebuilding process, and it’s important you don’t restrict. In general, high quantities of protein are best for muscle rebuilding, but don’t neglect lots of fat and carbs too. Basically, all food is good food at this stage.

After finishing fourth at her debut 50 miler at The North Face 50 Mile Championships last week, Megan Roche found herself waking up famished. The night after the race, she ate most of a pizza at 4 a.m. A few nights later, it was a tub of yogurt and cereal. By four days later, she felt as good as new.

Related: The Nutrition Secret of the Pros

Let your hunger guide you, and don’t worry about getting a bit squishy after a long race. If you’re racing shorter distances, focus on eating well, but perhaps without the overnight pizza. Proper fueling and hydration will help reduce inflammation and muscle damage, in addition to stabilizing hormones.

After the period of complete rest, the athletes I coach come back with easy, slow runs, which help reduce lingering inflammation and avoid overloading bones and joints. After ultras, they’ll usually do 20 to 40 minutes slow for a week before progressing farther. After shorter races, they might just do a day or two easy and slow. Practice a reverse taper, building back gradually and cautiously.

Thank you! This article was very helpful, will follow some tips recoveing from the Swimrun World Chamionship! /Fanny