Pro Tips for Your First Ultra

Professional runners reflect on their first ultra experiences, and offer tips for others just starting out. 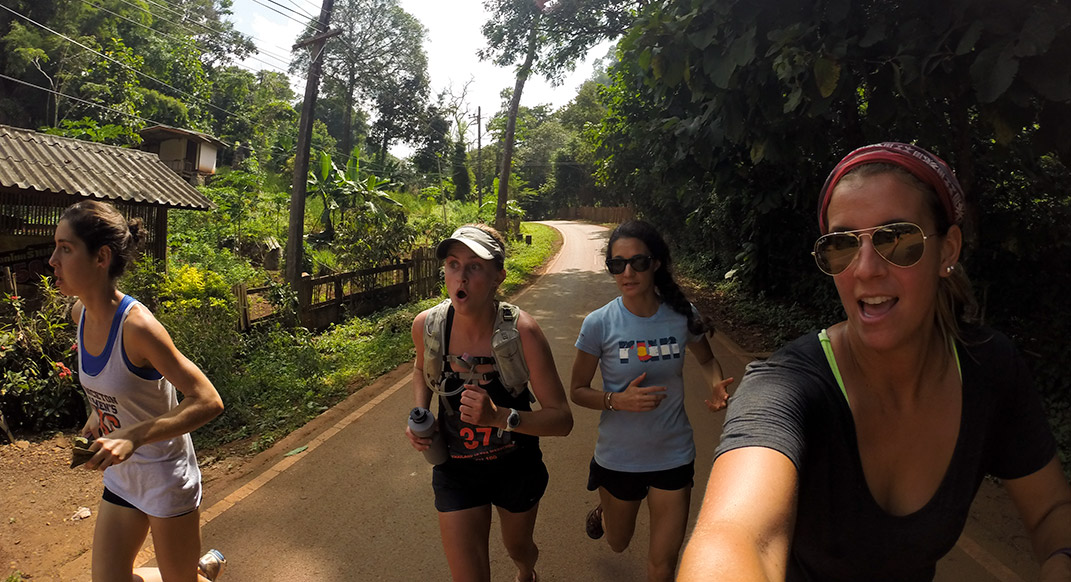 Gallagher and her "crew" during her first ultra, an 80K in Thailand. Photo courtesy Clare Gallagher.

Your first ultra can be a daunting experience. There are so many variables—what (and how much) to eat, how to pace, how to handle the night portion—and so many unknowns. For most runners, that first ultra will not go perfectly. Even professional runners have to stories to tell about mistakes made early on in their ultrarunning careers.

Trail Runner chatted with five top ultrarunners about their first ultra experiences and tips for for first-time ultrarunners.

Clare Gallagher: Starting in the land of cobras, vipers and rogue elephants.

Gallagher, 25, of Englewood, Colorado, turned to ultrarunning by chance after graduating from Princeton University in 2014. Burned out from years of college running, she ventured out to Thailand to teach english. She came across an 80K race in the northern mountainous region and decided to sign up.

“It was rather dangerous, to be honest, with the most poisonous snakes in the world,” says Gallagher. “By about five hours in I felt like I was in Dr.Seuss land. The flora in that region—the biodiversity—is just crazy, even if you are not running an ultra. I felt like I was on acid. I was by myself for probably 11 and a half hours […] I haven’t hallucinated that much since that race.”

Fueled on high-calorie sticky-rice concoctions (a Thai delicacy) and pure cane sugar, Gallagher ultimately won the race, followed by only one other female finisher.

“I fell in love with this sport in such a unique, raw way,” she says. “Without any pressure or corporate atmosphere. I love the challenge of being alone and the intimacy with nature. I regained a love for running. Whenever [the pressure] gets me now I immediately think back to why I fell in love with the sport in the first place.”

Gallagher’s tip: Don’t take yourself too seriously.
“You have to be stoked on trails. People underestimate the joy and passion that comes with trail running. Don’t take that for granted […] It is important to cherish the time you get to spend outside in cool places.”

Michael Wardian: From a 2:45:44 marathon to a less-than-perfect ultra.

It was 1998 when Wardian toed the line of his first ultra, the JFK 50 Miler. “It blew my mind when I first heard people could run 50 miles,” he says. “I thought people were lying […] I had to see it for myself.”

Having run a 2:45:44 marathon a few weeks before, he figured he could take that time and double it. “I refused to walk, but I was running slower than people who were walking,” says Wardian.  He finished in 7:54:19, almost two hours behind the lead.

He thought he would never run an ultra again, and for a while he didn’t. But nine years later, he returned to the JFK 50 and won, earning a spot on the U.S. 100K team.

Wardian’s tip: Have a desire to make mistakes.
“You hear all this [advice] and you don’t know what is right. In the end it’s best to learn for yourself […] There is a guy I know that would fuel for a 100-miler with a case of jelly donuts. That doesn’t really work for me, but it was amazing for him. He would eat them and just fly.”

Cat Bradley: Racing with bronchitis and a cracked patella

At the start of the 2017 Western States—perhaps the most competitive 100-miler in U.S. ultrarunning—almost no one predicted that Cat Bradley would win.

Bradley, 25, of Boulder, Colorado, is a newcomer to the sport. She began her ultrarunning career at the 2014 Rancho San Juan Trail Run and Camp 50K. Her longest run leading up to the race was eight miles, and she was unaware that she would need a water bottle, but she finished.

When race day rolled around, Bradley was plagued with bronchitis. Fresh out of college, she could not humour the thought of spending so much money on a DNS, so she decided to race even though she couldn’t speak.

“I suffered the entire way,” she says. “On top of my bronchitis, I did everything wrong. None of my crew had run a 100, and we had no idea what we were doing. My pacer started throwing up two miles in. I was having really bad stomach issues from the prescription medicine. There were lots of potty stops on the side of the trail.”

Bradley ultimately missed the cutoff, and became an unofficial finisher in 36:02. “Any time I think I am suffering, I think back to Bryce 100,” says Bradley.

She quickly learned from her mistakes, and her next year of racing was breakout. In 2015 she placed second at the Bear 100, in 2016 she set the course record at the Rio Del Lago 100 and in 2017 she won the Canyons 100K followed by a first-place finish at Western States.

Bradley’s tip: Plan to finish.
“Let go of expectations, of anything, and just focus on going into [your first ultra] confident. Not confident about how you are going to do, but just know in your heart that you are going to finish. Then there is no room to DNF in your mind.”

When first getting into ultras, Meltzer did not start small. His first race was the 1996 Wasatch Front 100 miler. Leading up to the race, he had been running hard up mountains, but had only been averaging about 40 miles a week.

“I had some training for [Wasatch Front],” he says. “Probably not 100-mile training, but at the same time I was 29 years old. I was young and ambitious.”

Meltzer came into the mile-39 aid station in first place alongside Tim Seminoff, of Utah. Seminoff pulled out of the aid station first, and Meltzer didn’t see him again until the finish.

“I slowly made my way backwards in the pack,” Meltzer says. “I got lost at mile 93, which was totally demoralizing at five in the morning. I probably walked the last 40 miles without jogging a step.”

He ultimately finished in 28th place in 28:26 minutes, vowing never to race a 100-miler again. But, like many runners, a few days later he was wondering what race to sign up for next. “It hurts, but then the soreness goes away and you think back on what you did, and think, ‘Well I could do better,’” he says.

Meltzer did “do better.” Two years later, he returned to Wasatch Front and took first place. To date he has raced 76 100-milers, 38 of which he has won. Now, at 49, he is still racing, directing races and coaching up-and-coming ultrarunners.

Meltzer’s top tip: Use your resources.
“You can look up on Google people that have been coaching for 30 years and are certified by 900 different affiliations but have never run an ultra, and if they have never run an ultra, how the hell do they know what it feels like at mile 70? They know it is going to hurt of course, and can give advice, but it is best to speak to people who have done it before. Don’t be shy asking people.”

Meghan Arbogast: From hate to love

Arbogast, of Cool, California, raced her first ultra, the McDonald Forest 50K, in 1996.  “I hardly call it my first one because I went out too hard and hated it,” says Arbogast. “The second half was miserable. I changed shoes half way through, and they were too small. I didn’t know how to power hike so I ‘ran’ every step. I was really into road marathons at the time, so I quickly gave up [trail racing].”

She swore off the trails, and would not return again until 2003, when she ran the at the Siskiyououtback (SOB) 50K. This time, she fell in love with ultras.

“My second ‘first ultra’ went fabulously,” she says. “I had finally gotten the bug and was running more trails and made friends with ultra runners. So I was ready for the terrain this time.”

Arbogast took the women’s first place and has since gone on to achieve 10 top-10 finishes at Western States. Just four years ago, at 51, she took the title at Way Too Cool 50K. That same year she finished Ultra-Trail du Mont-Blanc (UTMB) 100.

Arbogast’s top tip: Listen to your body.
“My mistakes over the years are generally those of neglect. I’ve learned to eat and drink right, but then sometimes I’ll forget that I still need to eat between aid stations. There are still times where I might go a little too hard early on in a race if I don’t keep my ego and heart rate in check […] In my first 100 I got hyponatremia [low blood sodium levels due to overhydration]. I wasn’t taking in salt, drinking way too much water and I had horrible blisters and felt nauseous. I was able to still finish well, but it wasn’t pretty.”

Karl Meltzer still holds the official supported AT FKT but the time has been bested by Joe McConaughy in the self-supported fashion.

Hi Will, Thanks for your note! This article was written three weeks ago, before Joe had set his record, and we failed to update it before publishing. It’s now been changed.