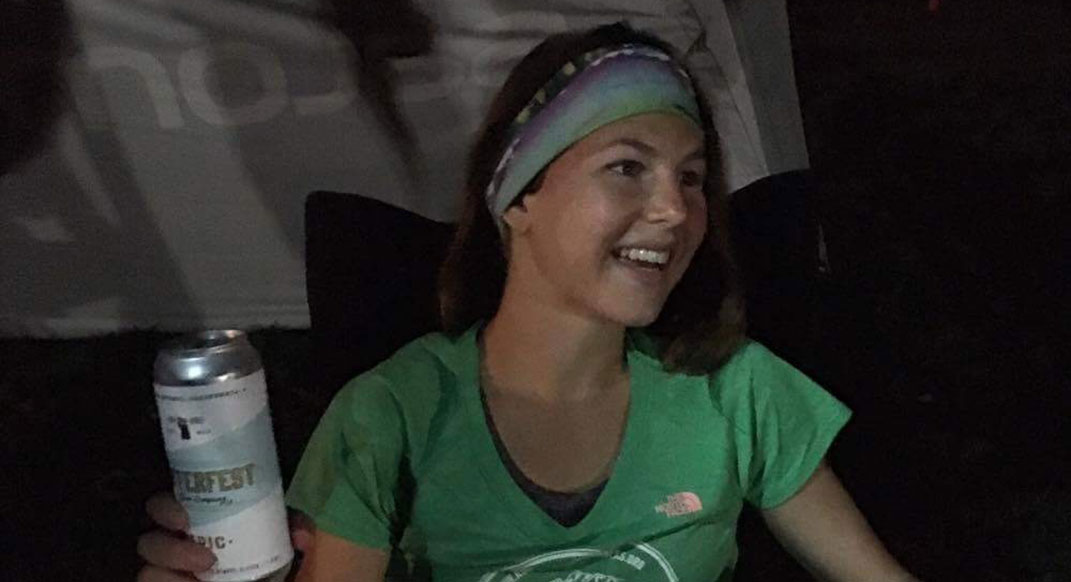 Cat Bradley celebrates a sufferfest at the Rio Del Lago 100 with a Sufferfest IPA. Photo courtesy of Cat Bradley

“My strongest attribute definitely seems to be my pain tolerance. I can take a lot.”

That quote is from Cat Bradley’s first email to me to talk about coaching. It was August and she had just had a tough race at the Headlands 50K. She was ready for something new. What were her goals?

Well, I thought, that pain tolerance would definitely come in handy. As would her background as a tough mountain adventurer who has thru-hiked the Appalachian Trail and a speedster who’s done well in 800-meter track races.

So we went back to the drawing board and re-thought everything about training, racing and mindset. And the day when she’d win a 100—reaching her long-term goal—came quicker than she anticipated. At the Rio Del Lago 100 Miler in California on November 5, Cat set a 10-minute course record, winning by nearly 90 minutes. In the process, Cat, who is 24 and lives in Boulder, Colorado, may have established herself as the world’s strongest kindergarten teacher.

How did she do it? Here are four takeaways from Cat’s build-up and race that you can apply to your trail racing at any distance.

Downhills are like muffled flatulence after a massive burrito—silent but deadly. It’s easy to assume downhills are the easy part of races, but that’s only true if your muscles are prepared to move quickly and efficiently without having the eccentric contractions cause breakdown.

On top of that, if you are ready for them, downhills can be “free” speed, allowing a trail racer to run fast and make up time without having heart-rate spikes that could diminish performance later on.

On Saturday and Sunday every week, Cat did back-to-back runs where she was instructed to “run the downhills with purpose.” In general, these weekends totaled 30 to 40 miles over the two days, with lots of purposeful downhill running. Cat called on this resilience and free speed on race day, pulling ahead of the course record in the final 30 miles.

Takeaway: No matter what distance you are racing, be prepared for the downhills. All of my athletes focus on running downhills at a smooth, moderate effort during their weekend runs.

Slow training begets slow racing. By working your rear through the gears during training, you can get faster at every effort level.

In her first email, Cat had a common complaint. “I lack leg speed,” she wrote. “I have a pretty solid 100 mile pace that I can hold onto for a long time, but I can’t go much faster than that in training or racing.”

So our first goal was to get her more gears. Three days a week, Cat did short, fast strides between 20 and 30 seconds, working to shorten rest between them over the course of the training cycle.

Then, every Wednesday, she did a short, focused workout designed to improve her VO2 max and lactate threshold. We started with one-minute intervals, and worked that up to three-minute intervals. Putting this all together improved her running economy. By the time Rio Del Lago came along, she was running the same speed at a much lower heart rate. As a result, her “solid 100 mile pace” got much faster as well.

Takeaway: Throughout the season, incorporate strides into your training. Once you have an aerobic base built and your running economy is good, add short intervals. Counterintuitively, getting faster on the flats makes you stronger in the mountains.

Trail racing is designed to put you out of your comfort zone. If you want a clean, predictable experience, stick to the roads.

The best way to train for the unpredictable nature of trail racing is to have unpredictable training adventures. Cat already had this element perfected—she is an adventurer at heart who loves nothing more than playing in the mountains with her boyfriend Ryan. So in the build-up, we incorporated those long mountain days with Ryan into her structured training. Cat would sometimes do 20 miles cavorting over rocks and frolicking through streams, adapting her body to the unique and unquantifiable stresses that might arise on race day.

Takeaway: There is always a time and place for long days in the mountains. Even though you might be doing more structured training, spend a couple days a month having unstructured adventures on your favorite trails.

4. Smile through the stuff.

Trail racing is an exercise in crisis management. It’s not about avoiding issues, but dealing with those issues so that they don’t become race-ending catastrophes. My pre-race email to Cat explained the philosophy we worked on in the months before Rio Del Lago:

“Prepare yourself now for everything to go wrong. Because it will. Trail races are an exercise in dealing with [stuff], rather than avoiding [stuff] altogether.

“Focus on fueling, managing effort, and staying positive. Everything else is out of your control. SMILE THROUGH THE [STUFF]. No matter what, do not let even the smallest negative thought come in. Worst case scenario, you DNF. Who gives a [stuff]? Literally no one. People who care just want you to be happy. You owe it to them to smile and celebrate independent of what actually happens in the race.”

Then, the night before the race, I gave her my final words of wisdom:

“Right now, promise me when [stuff] hits the fan, you will laugh. Our mantra: relentless forward progress, relentlessly positive outlook.

“Those two things are what you control. Now go control the [stuff] out of them.”

Cat deals with one of the normal low points of a hard trail race. Photo courtesy of Cat Bradley

At Rio Del Lago, Cat did all that and more. She combined her talent, adventurous spirit and smart training into a record-setting race. Best of all was a text I received from a spectator who saw Cat at mile 50, which shows the whole point of running trails in the first place:

“She definitely looks happier than everyone else.”