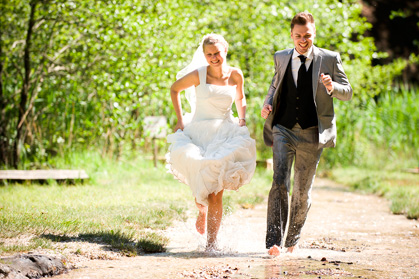 Last March, I found myself huddled around a campfire that Gary “Laz” Cantrell, Race Director of Tennessee’s Barkley Marathons, had made. The flames were just beginning to radiate warmth and thaw a plate of frozen chicken, as well as my numb fingers. I was tired, cold and hungry, and before I could stop myself, I began to retrace the events that had led me to this moment.

“So, I run,” Nick Hollon, my boyfriend, had said on our first date. I nodded, thinking it was his method of keeping fit, like some runners. A hobby. Maybe a few 5Ks sprinkled throughout the year.

“Like, a lot,” he added, emphasizing those words as though I hadn’t understood. And I hadn’t. What he meant was that he regularly raced 100-mile races, for fun. I’ve always been active and love getting out on the trails, but at the time had never run more than 10 miles on a trail at once.

Now, five months later, I was on day three of crewing him for Barkley, a 100-mile run set in the forests of Tennessee’s Frozen Head State Park. It was his third attempt at Barkley, and his thirteenth 100-miler, but it was my first time crewing for anything, let alone a race as long and grueling as Barkley.

Though I wasn’t a trail runner to begin with, both from running a few trail races and by sheer proxy to the trail-running community, I feel like one now; I can talk for hours about FKTs and know the best ways to rid dirty trail shoes of their consistent smell. I’m also prepared to have any food left in my house inhaled if Nick comes over after a training run.

Although we’re not married, there are a number of common challenges and joys to being in a committed relationship with a trail runner. I spoke with several other athletes and their spouses about how trail running has affected their relationship and home life.

For someone who isn’t a competitive runner, it’s hard to understand how running can take up so much time. Nick Clark—winner of the 2013 Wasatch Front 100-miler—has been married to his wife, Dana (who’s not a runner) for 12 years.

“I’d be lying if I said we’ve never had issues with Nick’s running,” says Dana. Before Nick began to train at the professional level, neither of them was sure how to balance Nick’s running with the rest of their lives. But, after moving to Fort Collins shortly after they married, the couple decided to start organizing their schedules so that Nick could run—but still be there for his family, including their two young kids, now ages 3 and 7.

“I’m not the type of person to ever say no to someone trying to achieve a dream or a huge goal,” says Dana. Plus, she adds, Nick knows being a husband and father are his first priorities. “I’ve found that the easiest way to deal with him running at this level is to embrace it all. Once I could do that, I was kindly welcomed by his friends and benefited in the sense that they became my friends, too. Rather than feeling bitter, I could enjoy myself and share a much larger part of his experiences.”

Avid ultrarunner Deby Kumasaka, 50, of Edmonds, Washington, also married a non-runner, Kyle, her husband of 19 years. She trains six days per week, lifts weights, does core work two to three times per week and regularly logs weekly mileages of 50 miles. If it’s peak week, that number hovers between 75 and 100 miles. On Saturdays she often runs from dawn to dusk. Of course, this is all in addition to her full-time job as a researcher at Fred Hutchinson Research Center.

“But,” she says, “I still try to keep Sunday for family time.”

When asked if Kyle ever resents Deby’s rigorous training schedule, he says no.

“It’s good for her to get away,” he says. “And I think our marriage has a very strong team aspect, originating from having common long-term goals and being very compatible.”

Across the country in Elkin, North Carolina, elite runners and spouses Jason and Alison Bryant, share a passion for running trails, but usually prefer to train separately. Alison runs in the early mornings before Jason is awake, and Jason runs at night, after Alison has already gone to bed.

If they do happen to run together, they run at different paces. Jason says that it works out anyway—“I like to stop and see the views. It works out well since I’m running a little faster and she catches up while I’m taking photos.”

Deby strives to schedule her training so that it doesn’t interfere with family life and being there for her three sons, ages 13, 17 and 24. But, things don’t always work out and occasionally it’s her family that makes the sacrifice.

“One time I was crewing a friend on a 170-mile road run that went 24 hours longer than expected,” she explains. It was her son’s 23rd birthday and they had made plans to celebrate. “My son said, ‘It’s no big deal, Mom. Stacey needs you.’”

Often, her sons are happy to be a part of her running escapades, including helping crew her at ultras.

“Our youngest sons would video record Deby during her races,” says Kyle, “pretending they were sports announcers. They’d call themselves the Runner’s News Network.”

The Bryants both manage to run competitively. However, because they live in a home built by Jason himself, their busy training schedules mean they’re still waiting on kitchen cabinets, wallboards and the upstairs bedrooms to be finished.

“I work about 30 hours a week—it just allows us to do what we enjoy,” says Jason. He adds that even an indoor toilet is a luxury, referring to his eight-year stint living in a barn, which overlapped with their dating time.

“Our life has a different focus than most.”

Job flexibility is a bonus, too, especially when one has young children. Nick Clark works completely from home, which, he says, gives him the chance to run at lunch when the kids are at school or in the early morning before everyone is awake.

“That way,” he says, “my running is pretty much invisible.”

CREWING FOR YOUR SPOUSE

Supporting your husband or wife during their training is a completely different task than crewing your spouse when they’re running a race. In fact, it’s not altogether uncommon for fights to occur over a forgotten pair of socks or the wrong supplies at a crew-accessible aid station.

One year, at the Western States 100-Mile Endurance Run, Nick says, “It was abnormally cold and windy up in the high country and Dana was waiting with the kids.” In the mayhem of taking care of everyone in poor conditions, Dana accidentally put the wrong powder in one of Nick’s bottle—and he snapped at her for it.

“The minute I was out of the aid station I totally regretted it,” he says. While Dana had already forgotten about the incident, Nick had to wait another 30 miles until the next aid station to apologize.

“I guess I was carrying a heavy emotional load through that part of the race,” he says.

Spouses often play an active role beyond that of feeding and caring for their runner during a race. Knowing how to address low points or stress-induced tempers is often a skill only a spouse can fix.

Alison’s background in physical therapy came in handy when she was crewing for her husband at the USA 50 Mile Championships in 2008. Jason came into an aid station experiencing bad back spasms.

“She worked on me from every aid station after,” he says. “I would not have placed third, let alone finished the race, without her.”

Kyle met Deby before she was a runner—and doesn’t hesitate to say that he’d love her even if she didn’t run.

“I think that the character traits of ultrarunning that drive Deby’s passion —diligence, perseverance and a positive mental attitude—are why I love her,” he says.

Dana Clark feels similarly, and realizes that without running, Nick wouldn’t be as happy—and their marriage would likely suffer.

“There’s no point in getting resentful once you accept someone for who they are,” she says. “It’s counter-productive and the real issue is: don’t you want your partner to be happy and successful in their lives? That answers it for me.”

Read on for 7 tips for dating, living with or being married to an ultrarunner …

TIPS FOR DATING, LIVE WITH OR BEING MARRIED TO AN ULTRARUNNER

1. Always have a stocked fridge and pantry. Your ultrarunner may readily consume an entire tray of your freshly baked blueberry muffins in one go. Take it as a compliment, and remember that a satiated ultrarunner is always better than an angry, starving one.

2. Offer your support. Your ultrarunner may request that you crew for an upcoming race or show pity for the fact that he or she “has to” run a 20 miler at 4 a.m. tomorrow. Just as you might expect your ultrarunner to be supportive of your passions and goals, show your support—or at least your understanding—of theirs.

3. Worry—but not too much. Your ultrarunner is probably inept at estimating how long he or she will be running for—or may frequently get distracted by a “trail” that is, in fact, little more than an overgrown deer path through briars. Realize that an hour or two later than what he or she says is more normal than not. That said, do know where you runner is headed. Although cell phones are not always amenable to an ultrarunner’s quest for peace, a phone call can go a long way in potentially dangerous situations.

4. Ask for help when you need it. Don’t let resentment build up if your ultrarunner is lagging in the chore department due to an increased training schedule. Let him or her know that you’re a team and need to work together on caring for your home and family.

5. Be flexible. Realize that sleeping, eating and training schedules will shift again and again depending on how often your ultrarunner is racing. Learn to love the look of 15 pairs of dirt-colored shoes next to your front door and the stench of a pair or two drying next to your doorstep.

6. Find ways to incorporate your ultrarunner’s training with couple or family activities. Your spouse has an active rest day? Suggest you go on a hike together. Your spouse needs to get in a long, easy run? Hope on a bike and pedal alongside.

7. Live and let live. Remember that blistered feet, ravenous appetites and mounds of dirty laundry are just the side effects of a happy, healthy and fit ultrarunner.