Run an Ultra Off the Couch

From zero to 40 in six weeks

We were sitting in the restaurant, waiting on our Thai food, when … 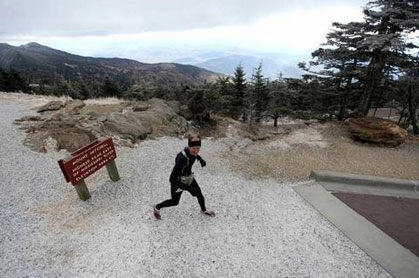 We were sitting in the restaurant, waiting on our Thai food, when my friend Dan spoke up. “I’m going to have to drop out of the [Mount Mitchell] Challenge this year. My hamstring just won’t hold up for the big runs. Kills me.”

My ears immediately perked up. The Mount Mitchell Challenge (The Challenge for short) is a 40-mile eastern epic that climbs from Black Mountain, North Carolina, to the summit of Mount Mitchell, the highest peak east of the Rockies in mid-February. Last year I ran the accompanying marathon, which, in comparison, is like a one-mile fun run.

I missed registration this year. When it opened on October 2nd, I was three miles deep in Tennessee’s StumpJump 50K. That probably didn’t even matter, though, because both races filled up in less than 15 minutes. Besides, at the end of StumpJump I was too fed up with running ultras to care. However, the “fed up” feeling did not last. Since StumpJump, I had run less than 40 miles total. But, for some reason, when Dan said he was out, I immediately wanted in. I asked Dan to check with the race director and see if I could take his slot. I could. The problem: The Challenge was only six weeks away.

Running 40 miles up and down a mountain requires a great deal of physical and mental strength. Could I develop that strength in such a short amount of time? I didn’t know, but I wanted to try.

I simply wanted to see if I could just complete the course, as it is notoriously treacherous, with sub-freezing temps, snow and, often, hurricane-force winds.

I knew that trying to pile on the miles in such a short amount of time was foolish, so I settled on training with consistent moderation, along with the self-discipline to remind myself that I was not training to finish particularly well, but to enjoy the experience and finish.

By not pushing my body to extreme fatigue, I was able to recover quickly and train consistently. During the week I ran between three and five miles each day, then each weekend did a long run, beginning with seven miles and working up to 24.

The race began at 7:30 a.m., initiating a day-long journey. It was a long, beautiful, treacherous and sometimes painful adventure. Following my planned pace, I barely made the summit cut-off. The first 14 miles climb from 2000 feet in elevation to over 6000 feet, making even the necessary 12:45-per-mile pace taxing.

The miles ticked off, and I hit the 6683-foot summit at noon. The temps hovered around 10 degrees, and winds gusted between 50 and 75 miles per hour. I touched the summit sign, and stopped to look around. I really had made it to the top. I took a short break to walk to the overlook, and stood on a bench to survey the mountains.

The feeling of making my way all the way up, on foot, was amazing (no matter that I had to run back down!). I shouted to the heavens, and smiled. Hopping off the bench, I trotted back down to the summit aid station.

A volunteer shouted to me, “Runner! What’s your number?”

Matt Ragland is a writer and summer camp director at Camp Rockmont. He has run competitively since high school, though it wasn’t until he moved to North Carolina that the long days in the woods began to call him. Check out his website, and follow him on Twitter.