What is the longest run you need to do to prepare for an ultramarathon? 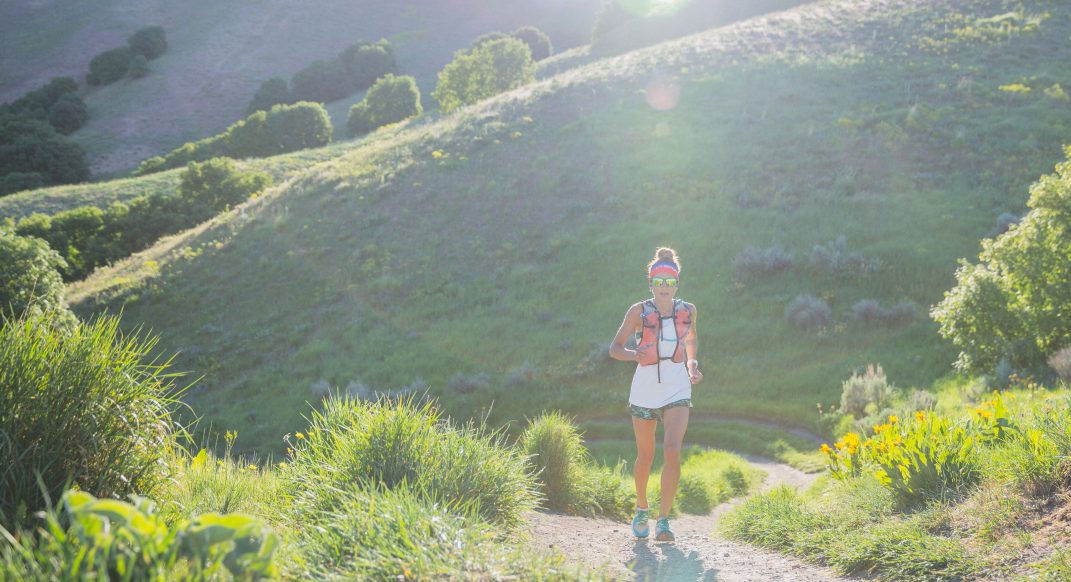 The weirdest thing about training for ultras is that you don’t actually need to go that far in training to be prepared. That’s the paradox that launched a thousand ultra-coaching websites.

It all gets back to what adaptations you’re actually looking for. Aerobically, most adaptations come from a main dish of consistent volume and a side dish of periodic intensity. Biomechanically, you want to practice efficient output most of all. Both of those general areas are optimized with an approach that doesn’t look that much different than traditional marathon-or-below training.

Where things might start diverging a bit is in terms of adaptations to the musculoskeletal system and the brain/ body catch-all area we’ll shorthand here as neuromuscular adaptations.

Put it all together, and here is how I like athletes to think about long runs for ultras. Almost every athlete will be venturing into the physical unknown on race day, particularly in races over 50K. Focus on developing your overall speed, and embrace the distance unknown.

1. An athlete needs to feel healthy and motivated. The decisions made at mile 30 or 50 or 70 are often about mental determination and health as much as physical strength and endurance. And any pre-existing injury often has a way of undermining performance after you take 50,000-plus steps on it. Since long runs are a big risk, keeping them as short as possible to achieve the adaptation objectives is the best bet.

2. Running economy should be maxed out. Ultras are an energy game. You start with a given reserve, and the more you burn off, the closer you get to running headfirst into a physiological wall. If running takes less energy (improved economy), athletes can go faster all day prior to bonking, particularly with adequate fueling.

There is variance, but most athletes will be able to hold a set percentage of their aerobic threshold on race day, so raising that threshold through balanced training is more important than long runs most of the time. That’s also where gut training comes in, preparing the body to absorb nutrients during focused efforts.

3. The musculoskeletal system needs to be as ready as possible for the specific demands of race day. Prioritize downhills, which cause eccentric muscle contractions that can reduce power output substantially in untrained athletes. To build resilience, it’s best to go a bit faster than you will on race day over similar terrain. That gives some extra wiggle room to be ready for whatever crazy stresses a race throws at you.

My nightmare is putting unscientific numbers on things, but I’m not paid the big magazine bucks to withhold information, so here we go. Here is a rough approximation of max long run distance for ultras of different lengths, with the caveat that different things work for every athlete based on background and goals. 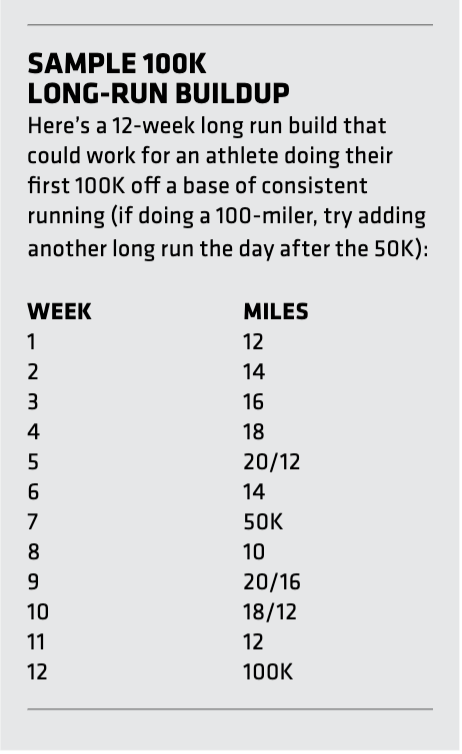 20 miles two-plus times is plenty for top performance. A 50k is basically a slower marathon, so train similarly, making sure to be prepared for the specific terrain and fueling demands of race day. Going too much farther risks reducing running economy due to inefficient stress or causing injury.

BONUS: After one or two of those 20-milers, do shorter long runs the next day to get some musculoskeletal and neuromuscular stresses that could supercharge performance.

My preference is that an athlete races a 50k in training anywhere in the three to six weeks before race day, along with some 20-milers with back-to-back long runs after. If not, two 25-milers works really well, plus a 20-miler or two with back-to-backs. In some of the longest efforts, practice fueling just like race day and, ideally, go around race speed to prepare for specific stresses.

BONUS: Within some of the long runs, do 30 to 90-minute tempo portions where you aim for marathon effort or faster. That provides efficient aerobic and musculoskeletal stress.

In a perfect world, a 50-miler (or even 100k) in the six to 12 weeks before is optimum, since there seem to be some adaptations that require venturing into that unknown territory, particularly for the metabolic and neuromuscular systems. The remainder of the long runs can look like 50-miler training above, but with less of a need for the 50k training race. If no 50-miler, doing a 50k with a long run of 12-20 miles the next day can simulate similar stress.

BONUS: A training camp of three to five days with substantial volume is a good option around four weeks before race day. For example, Western States Traning Camp is 30-20-20 on course over three days.

Spot on, I reckon running on tired legs back to back runs are the answer. Mental and physical toughness development !! Also the theory is….what you can run as a total in a week is what you can run in one go!💪💯