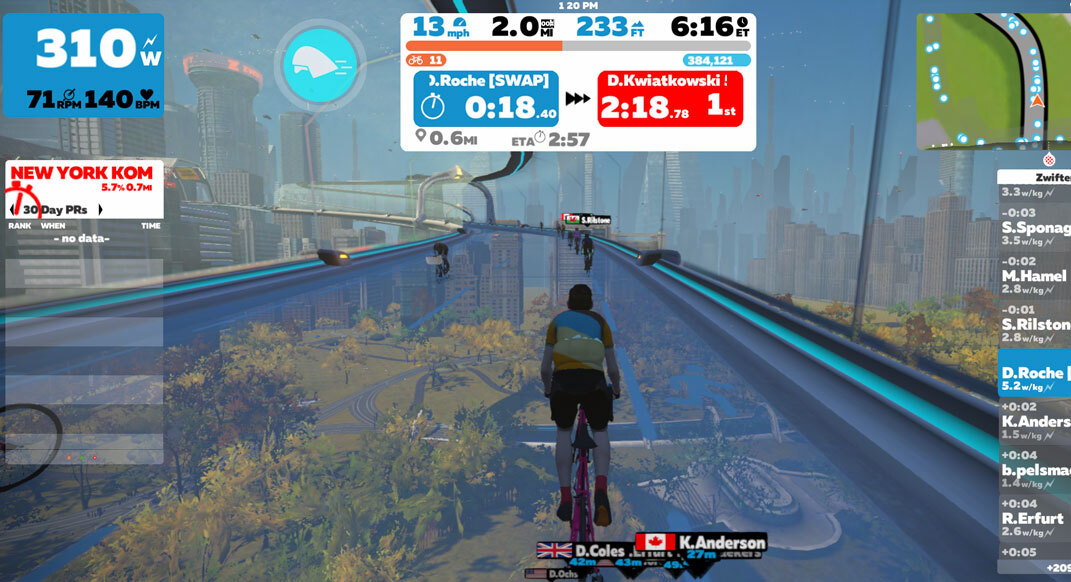 Have you ever seen something and immediately thought: “This is EXTREMELY my sh*t?” That’s how I felt when I first watched Ted Lasso (if you haven’t watched it yet, please drop everything and start tonight). It’s the joy I get every time there is a notification from my phone that food delivery is available at all times of the day. And, most recently, it’s what happened the first time I tried Zwift.

I was a kid of the 1990s. Most of my formative memories involve proximity mines in the Basement (Goldeneye 007), scoping out my brother through the walls with the Farsight XR-20 (Perfect Dark) or drafting the next NFL superstar (Madden). I lived in a rural place with few non-livestock friends for miles in any direction, and video games were always there to pass the time.

And time passed. I went to college in a big city, law school in a small city, started post-school life in a medium-sized city. Those video games faded away, becoming memories tied up in a mix of nostalgia and uncertainty and gratitude and regret that I think characterizes what it feels like for most people to look back on the past. I thought my gaming life had passed for good.

Then, a couple months ago, I logged into Zwift for the first time.

Zwift is a massively multiplayer online cycling and running world, where you follow your avatar as it pedals up mountains or runs across coastlines. “That sounds moderately lame,” I thought for the longest time. “Ride outside. Run outside. Live your life in the real world.”

Oh, wait, that’s also what adults used to say about video games. Time had washed away all those virtual experiences that helped me grow into who I became, replacing them with a narrative that the time in the virtual world was “wasted.” What I failed to remember is this: in virtual worlds, you aren’t playing a character. You are the character. You get outside yourself, and in that moment, there is a chance to find answers you didn’t even know you were looking for.

What I failed to remember is this: in virtual worlds, you aren’t playing a character. You are the character. You get outside yourself, and in that moment, there is a chance to find answers you didn’t even know you were looking for.

Or you can just blow up fake aliens. Or climb fake mountains. Tomato, to-mah-to.

On Zwift, I felt like I was climbing up the real Mont Ventoux in France. Because I was. That chance to explore fully, as myself, without leaving the house, opened up a love of cross training that I had been trying to force for many years. Now, I look forward to booting up the cycling trainer every day I have a spare 30 minutes. Just like when sitting on my couch in middle school, it’s my time to leave the house and explore at a time when there’s nowhere else to go. COVID makes us all into bored kids, sometimes, I think.

OK, now that the little melodramatic video game essay is out of the way, let’s go over the basics. Zwift is an app that you run on your phone and computer. Ideally, you pair the app with a smart trainer or compatible treadmill. The modern bike trainers are totally different than they were a few years ago, so if you have a bad taste in your mouth from past experiences, give the new generation a try. You can “screen-mirror” the phone onto a smart TV, or just have your computer propped up on a table in front of your bike.

From there, it’s an expansive world to explore.

There are different venues, mountains to climb, group rides to join, races of all levels. The trainer resistance adjusts based on the gradient and drafting, so just like outside, you can anticipate the terrain changes based on what you see and sprint over the tops of steep pitches or coast on long downs. Plus, for unconfident bike handlers like me, there is a 99.99-percent reduced chance of breaking a collarbone. I reserve 0.01 percent for somehow falling sideways off the trainer.

Zwift has taken the cycling world by storm, with beginner to pro races and thousands of users at any time. But what began to surprise me this year was seeing it pop up in my Strava feed from so many serious runners.

Zwift has taken the cycling world by storm, with beginner to pro races and thousands of users at any time. But what began to surprise me this year was seeing it pop up in my Strava feed from so many serious runners. For example, go look at Hayden Hawks’ training leading up to his legendary course record at the JFK 50 Miler (Strava link here). Mixed in with lots of Utah runs are bike rides in Austria and France and England. Hayden went international without leaving Utah, and his fitness launched into the stratosphere.

I don’t know if Zwift is for everyone.

There’s a high barrier to entry with cost. These amazing new trainers can change your indoor cycling life, but they are not cheap. You can hook almost any bike up to them, but you have to have a bike in the first place. A Zwift subscription adds another $15 a month. Plus, your calves may get too sexy for your pants. So add a new pair of pants to the shopping cart. I can’t vouch for the running version either, since I don’t run on the treadmill.

But as an athlete, I was never able to spend more than 20 minutes on a trainer without questioning every life decision I ever made. Zwift has improved my fitness 10% and reduced my hypocrisy 90%.

But if you’re able to invest in your athletic future, Zwift could be a great option even if you didn’t spend an inordinate amount of time in seventh-grade role playing as James Bond. As a coach, I am a big fan of cross training for all athletes (see this article for an overview of the science and application). But as an athlete, I was never able to spend more than 20 minutes on a trainer without questioning every life decision I ever made. Zwift has improved my fitness 10% and reduced my hypocrisy 90%.

In my N=1 experiment, Zwift has been a revelation.

However, there are lots of confounding variables in that experiment, as demonstrated by my inner child co-authoring a good portion of the last 1,000 words. On the plus side, tons of athletes my wife, Megan, and I coach have been thriving with Zwift in the last year, including professional runners. On the negative side, there’s no control group since we tell everyone to use it if they can. No matter what, you absolutely don’t need Zwift. But maybe, if you’re anything like me, you might want it and not even know it.

The other day, I rode through Central Park in New York City. Megan came down into our pain cave, and she saw me giggling. It was my first time back in Central Park since the day I graduated college. After growing up in a rural place, escaping through video games, I moved straight to New York City for school, where just leaving the dorm room felt like entering a video game that I sucked at. In retrospect, I spent the next four years trying to find out who I was, and desperately scared that I wouldn’t like the answer.

But, eventually, after moving away from New York and meeting Megan, I did find an answer. Best of all: I liked it, growing to love who I was, flaws and all. So that is the moment Megan walked in on, with me sweating and giggling in the basement, the same person as I was all those years before, but with a totally different acceptance of that person.

“What are you laughing at?” she asked.

I gestured toward the screen, showing all the roads where I had sought all the answers all those years ago.

Goldeneye and Perfect Dark on the N64 were(are?) Incredible! I’ve thought about getting a trainer, but I’m not sure if they work for mountain bikes. Once grad school went 90% zoom I thought it would be a great way to stay active while sitting through lecture. I might have to give it a shot.

most modern direct drive turbo trainers are compatible with most mountainbikes!