The 17-mile route includes the notorious “Knife-Edge” traverse, along with 5500 feet of vert. 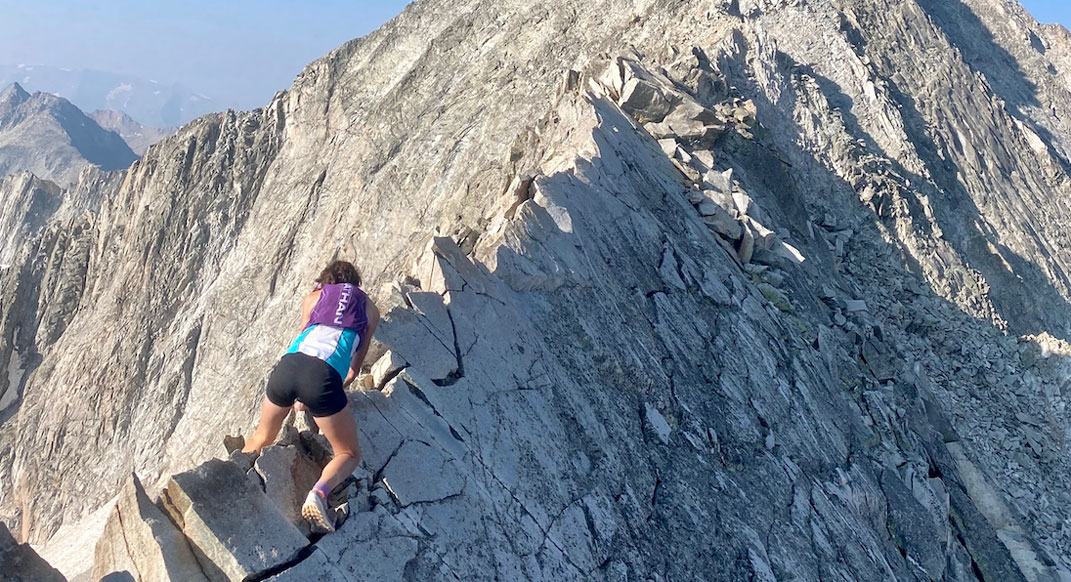 After eight miles and 5000 feet of climbing to the ridgeline just before the 14,131-foot summit of Capitol Peak, it appears. Like the shark in Jaws, you don’t see the villain until near the end. But you hear its foreboding music.

Dun-dun dun-dun. How can you move that fast over treacherous terrain?

Zoë Rom faced down the monster and used a technique she practiced over many years of putting herself out there and taking chances. She thought about it. She planned and stressed and planned some more and found a semblance of peace with it. And then she laughed.

“The ridge still scares me in a healthy way. Mostly, I was excited to get back on the Knife Edge because I think it is a super-cool and fun feature, and I love ridge traverses,” says Zoë. “I power-scooted by straddling it and just kind of bear crawling across. It’s not sexy, but it’s safe and relatively efficient!”

Zoë has taught me a lot over the years, but this might be the biggest lesson. If you’re going to make a metaphorical leap into the unknown, you might as well do it with love and laughter. Sprinkle in some stress and planning too, since we’re human and that’s what we do.

Addendum for 2020: never hesitate to use the power scoot.

I met Zoë a couple years ago when she was moderating a panel discussion. It was going to be the usual running store event, something like “Let’s Talk About Running Awkwardly For 45 Minutes, Followed By Snacks.” But Zoë made it something special. It became about life and fear and failure. Followed, of course, by snacks.

Afterward, my wife, Megan, and I got back to the car, and every married couple can probably identify with what happened next. In the safe confines of our Subaru, we debriefed what just happened, ready to dish the gossip. And Megan said what you’ll hear a lot about Zoë. “I love Zoë so much and I want us to be best friends.”

Amelia Boone: “Having Zoë in your life is like having your own personal cheering squad. She has a gift for understanding and empathizing with people, and has a way of brightening  everyone’s day.”

Kylee Van Horn: “While Zoë always gives 110 percent in everything she does, I think ultimately, it’s her spirit for life that I admire most.”

Ashley Brasovan: “Zoë is such a sweet and passionate human, coach, athlete and friend. She also has this intelligence and wit about her that definitely surprised me a little the first time I met her.”

Zoë has this magical way of putting people at ease. You know that feeling when you have your first sip of hot cocoa on a cold night?

I could go on, but you probably get the idea. Zoë has this magical way of putting people at ease. You know that feeling when you have your first sip of hot cocoa on a cold night? Zoë is like that, just with a deliciously biting sense of humor when you get to know her. Back when she moderated that panel, she was working at NPR in Aspen, honing her journalistic skills. But she had a gnawing feeling that there was something else. She wanted to tell stories—stories that were warm and funny mostly, daring and unique partly.

Mid-20s, in a really good job with a really good future, but she knew there was something more she wanted in the distance. There are often some sketchy traverses between your reality and your dreams. The next year, she power-scooted into the unknown, becoming an editor at Trail Runner magazine.

Zoë is living in Carbondale, Colorado with her partner TJ David and dog Walt. She is telling stories through the amazing DNF Podcast and countless articles, empowering other people to tell their stories too. With TJ, she has a thriving running coaching business Microcosm Coaching. Still, though, there are traverses. Traverses everywhere. And the hardest traverses of all might be the ones that take place between two ears.

“Leading up to the effort I really struggled with imposter syndrome,” Zoë says. “It felt really vulnerable to put myself out there.”

If I could think of a slogan for how Zoë lives her life, it might be connected to that quote. Zoë Rom: Putting myself out there, and helping other people put themselves out there too.

If I could think of a slogan for how Zoë lives her life, it might be connected to that quote. Zoë Rom: Putting myself out there, and helping other people put themselves out there too. She does that for me and dozens of people I know, and that’s just a peek into the keyhole of the lives she touches. The big thing she has helped teach me is what happens after vulnerability.

“But, there was also part of me that was just excited that I even had any confidence that I could do it! I was just proud to be a person who believed they could set an FKT on a 14er, whether or not they could actually do that. Stepping up to that line requires a lot of bravery, and I was really proud of myself for setting such a big goal.”

And it was a very, very big goal.

17 miles, 5400 feet of climbing from trailhead to trailhead, sketchy traverses and thin air and billions of rocks. Is running a metaphor? Sometimes I think so, but at least in this case, it doesn’t have to be. Big freaking mountain, certain death three inches to the right and left, pizza waiting at the car. What do you do?

Zoë stayed in the car and played it safe. Just kidding. Zoë crossed half court and pulled up from 35 feet with a hand in her face to shoot her shot.

“I picked this route for an FKT because I genuinely love every inch of it, and it’s all interesting and different in its own special way … Getting up early and running up 14ers is something that has always been exciting and joy-filled for me. The mountains are what brought me to Colorado, and being able to run up them makes me feel like the person I always wanted to be.”

Getting up early and running up 14ers is something that has always been exciting and joy-filled for me. The mountains are what brought me to Colorado, and being able to run up them makes me feel like the person I always wanted to be.

“Capitol Peak is basically a celebration of the fact that I love spending my weekends running up mountains, and this is what happens when I really stepped back from arbitrary racing goals and allowed my happiness to run wild.”

Sometimes, writing about running risks being like that old Seinfeld episode. So … I was scared, then I set this big goal, yadda yadda yadda, I won and am now an internationally sponsored athlete being paid to post Instagram stories. I don’t want to yadda yadda yadda Zoë’s run too much, but we’re already at 1,300 words, so bear with me. Running up to 14,000 feet with tons of rocks and exposure is hard. Unglamorous. Sweaty and smelly and often sh*tty.

“The first five and a half miles are a bit of an uphill grind, but the trail is super smooth and runnable so I gunned it right away. I was feeling good and excited to be able to run hard!” To me, this is like someone saying that they love to do their taxes, but to each their own.

“The trail dumps you above this gorgeous alpine lake on these comically steep switchbacks, which are really fun because you get to really power hike like a boss. I love a straightforward power hike.” Now this I can get behind. I am a big fan of walking. It’s my favorite physical activity outside of eating potato chips.

Next come the rocks. And more rocks. Then smooth. Actually that’s a typo, next comes the death-defying ridge traverse. Mixed in with Class 4 scrambling is the Knife Edge. Google it if you want to poop yourself today. Here’s a summary from an article about the tragedies on the mountain: “Unlike most 14ers, where sticking to a well-defined trail for long enough will bring you to the summit, Capitol Peak requires a long scramble across a field of loose rocks with death or serious injury a certain should you fall. Instagram photos do no justice to the intensity of this section of the trek.”

That’s where the new trail dance craze came in: the power scoot. Zoë scooted her way across, overcoming mental lows and soaring highs. Yadda yadda yadda, she demolished her goals and the record, flanked by TJ cheering her on and Walt licking her salty face.

What does it all mean?

There, dear readers, lies the secret. It doesn’t mean that much at all.

Zoë climbed Capitol Peak on her birthday, providing a good excuse for reflection. “If I didn’t reach my goal time,” Zoë says, “Then I would have just spent a great day celebrating on my favorite mountain!”

“No matter what happened, I was going to put it in my ‘win’ column because it was going to be a beautiful day on a truly amazing peak, and I would be spending it with my favorite person (TJ) and we were going to get carry-out pizza on the way home.”

Zoë climbed Capitol Peak on her birthday, providing a good excuse for reflection. “If I didn’t reach my goal time,” Zoë says, “Then I would have just spent a great day celebrating on my favorite mountain!

Conquering the Knife Edge is cool. An FKT is cooler. But you know what’s coolest? Putting yourself out there and getting vulnerable. Facing fears and DNFs and running/power-scooting boldly into the uncertain darkness. Knowing Zoë, and knowing what she has created and how many people she has helped along the way, it gives her final words a few extra layers of meaning.

Were you nervous? What if you didn’t get the FKT? Zoë’s journey is just getting started, but the winding trail has led her to one conclusion she knows for sure.

“It was just going to be a celebration no matter what.”

If I only knew what the fkt an FKT was! Thanks google!!

She sounds charming and delightful, filled with humor and cheer. What a pleasant change from all of the grim determination and fortitude than runs through the narratives of male trail runners with FKTs.