Of Angels and Winged Gods

How Gordon Ainsleigh qualified to run the 2018 Western States 100 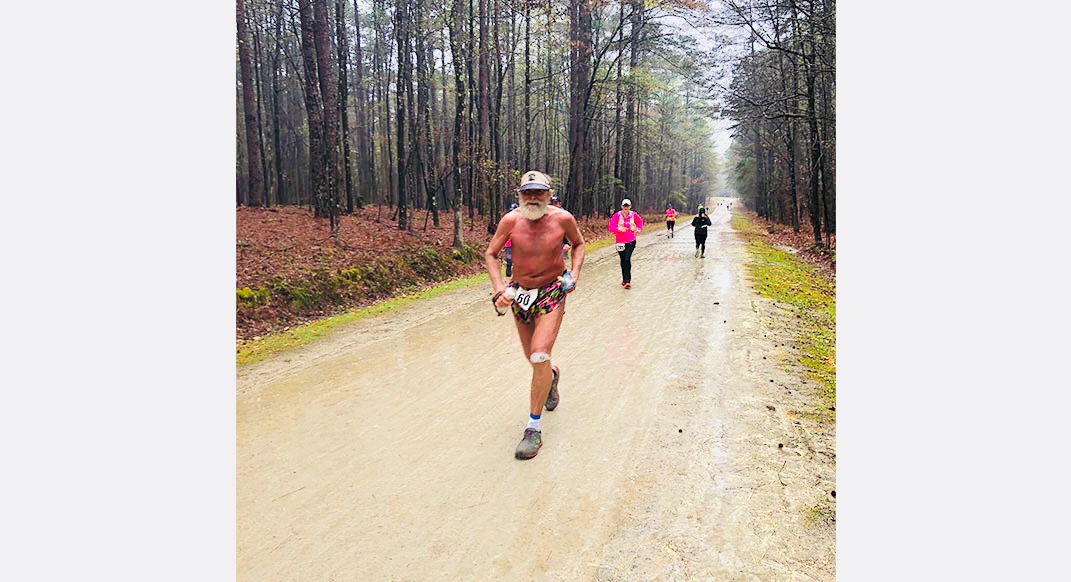 Gordon Ainsleigh during the first half of the Umstead 100

It became clear, in the closing miles of North Carolina’s Umstead 100 in April, that Gordon Ainsleigh may have to DNF. This was his last chance to qualify for this year’s Western States 100 (WS100), having been granted an extension by the WS100 Board following two previous failed attempts. Ainsleigh is 70 years old and, at mile 90, he was cold, unable to use his hands and experiencing back spasms that caused him to list sideways. He and his crew of one, Jason Tischer, had toiled through the rain and snow the previous 20 plus hours and needed to get Ainsleigh through the last 10 miles.

Father of the Footrace

Ainsleigh, of Meadow Vista, California, is known as the father of the Western States 100 footrace and many credit him with the creation of competitive ultrarunning. The WS100 started as a horse race, known as the Tevis Cup, “100 miles—One Day” ride. Ainsleigh had competed in that race several times previously, but, in 1973, his horse went lame, and he was unable to finish. The following year, 1974, still without a horse, his friends convinced him to run it himself. He finished in 23 hours and 42 minutes.

Three years after his inaugural run, the first official Western States 100-Mile Endurance Run was held and three of 14 racers finished. Since 1979, the race has reached capacity every year, which, for 2018, is 380 runners.

Right before the Umstead, Ainsleigh’s mother in law fell ill so his wife, Paula, went to be with her. Without Paula, who typically supports him at races, Ainsleigh reached out to the running community.

“When I put out the Facebook post, I just thought, nobody’s going to want to do this,” Ainsleigh says. “It’s an awful lot to ask. Jason is just incredible —so directed as a person.”

Not one to miss an opportunity to meet one of his running heroes, Tischer, 43, of Cary, North Carolina, responded to the message. Before he knew it, he was picking up Ainsleigh from the airport, welcoming him to his home and helping him prepare for the race.

First running WS100 at the spritely age of 26, Ainsleigh has now finished it 22 times and is the first to admit that getting older doesn’t suit him. Like someone who’s walked into the wrong, identical-looking home or recently awoken from a long coma, Ainsleigh seems to be out of place in surroundings that should be familiar. As he says in the Salomon TV episode, The Original, “I used to be the new kid on the block. There was a time when … I’d get into these things and I’d just feel like a winged god, and now I kind of feel like a … shuffling old man. It really sucks. I’m totally unprepared for aging.”

Clinging to his status as the pioneer of WS100, Ainsleigh isn’t ready to let go. “My hope is to toe the starting line at Western States one more time. I want to continue being a 100-mile trail runner. It’s the sport I started; it’s my baby, and I’m very reluctant to give up membership in that select group.”

Over the past six or so years, the board at WS100 has considered whether to grant Ainsleigh unlimited entry because of his status as the founder of the race, or whether to make him qualify like every other runner, and came up with a compromise: Ainsleigh has to run a qualifying race and finish with a qualifying time, but he has until the weekend of the Lake Sonoma 50 (typically the second weekend in April) to do it. Standard entry rules state that to qualify, a runner must complete a qualifying race the previous year (with the exception of the Golden Ticket races).

Prior to Umstead, Ainsleigh had attempted to qualify with the Javelina Jundred in October 2017 and the Rocky Raccoon 100 in February 2018. He DNFed both.

Tischer couldn’t have been a better partner for Ainsleigh. An ultrarunner who has finished in the top 10 of all but six of the 29 races he’s completed, he’s run the Umstead 100 twice and was the 2016 champion. This year, he’s running the Grand Slam of Ultrarunning: Old Dominion 100, Leadville 100, Vermont 100 and Wasatch Front 100.

“He put on a clinic for how to run a 100-mile race,” says Tischer with audible reverence. “He knew he had to put some time in the bank. He did the first 50 miles in 12 hours, so he had 18 hours to finish.” This is worth a momentary pause. Seventy-year-old Gordon Ainsleigh ran 50 miles with 4,000 feet of elevation gain in 12 hours.

On April 7th, the newly-formed Team Ainsleigh showed up at 5:50 a.m. to the starting line of the Umstead 100, which started at 6:00 a.m, to appease Ainsleigh’s nerves (he didn’t want to show up too early).

“It’s literally 5:57,” Tischer remembers “We’re just walking to the start line and he’s like, ‘Oh I forgot to put the pad in my shoe.’ We walk back to the car. He’s putting on his shoe when I hear the race gun and I’m like, ‘Gordy, the race started,’ and he’s like, ‘Yeah it’s OK.’ By the time we got to the start, everyone was gone, and I had to show him which direction to go.”

“[For the Umstead 100], the weather was slated for snow the whole day,” says Ainsleigh. “Because the course is one [12.5-mile] loop eight times, I knew that with all those people out there, it’d be slicker ‘n snot. I asked the angels for help. My experience with my life is that I’m kind of watched over.”

The angels answered. Tischer crewed Ainsleigh through the first 50 miles via bicycle and paced him during the second half of the race. [Tischer ran more than half of the race because of the number of off-course trips he took to get supplies.]

Tischer was nervous about the weather and if Ainsleigh could hack it. “It was pouring rain and 45 degrees,” he says. “But Gordy did three laps in shorts and no shirt.”

“We didn’t talk a whole lot,” says Tischer. “He kept asking, ‘what’s our time, what’s our time?’ [He doesn’t run with a watch.] People would see him, and he’d engage with them and was always telling people they were doing a great job. But when it came down to racing, he was all business.”

“He put on a clinic for how to run a 100-mile race,” says Tischer with audible reverence. “He knew he had to put some time in the bank. He did the first 50 miles in 12 hours, so he had 18 hours to finish.” This is worth a momentary pause. Seventy-year-old Gordon Ainsleigh ran 50 miles with 4,000 feet of elevation gain in 12 hours.

Finally, around mile 62, at 10:00 p.m., Ainsleigh and Tischer took a break at the race headquarters cabin located at the Start/Finish line to warm up by a fire. There, Tischer and a race medic convinced him to put on some layers.

“I had a pair of tights,” says Ainsleigh, which he apparently referred to as his pantyhose. “I had a tight top, a clingy thing and then I had a jacket, kind of a miracle jacket. I bought it at a thrift shop in the 1970s for about $6. It’s a Field & Stream Gordon & Ferguson Co.” [He’s decided to have it repaired for 10 times its original cost. “It’s worth it, for the memories and, hopefully, future years of use,” he says.]

By this point, Tischer’s role as the Ainsleigh angel was solidified. He was continuously making trips from the course loop back to the car to get supplies. At one point, shortly after leaving an aid station, Ainsleigh turned to Tischer: “Hey, I forgot ginger ale. When do you think we’ll be able to get some next?”

Tischer explained that it would be a while, to which Ainsleigh responded, “I have an idea. How about you run back and get some?” Tischer ran the mile back to the aid station and filled up a handheld with ginger ale. Upon his return, he asked Ainsleigh if he wanted it.

Between miles 65 and 75 was when things got tough. “Mentally, it was really hard,” says Tischer. “It was the middle of the night and it started snowing and we were mostly alone.” Ainsleigh’s back started spasming and Tisher performed pressure points on him in the hope of relieving them.

As the cold developed, Ainsleigh was no longer able to use his hands and Tischer helped him change clothes and hand fed him his salted potatoes and Hammer gels.

At mile 90, his back descended into such severe spasms, it caused him to lean significantly. He later compared the desperateness of the situation to his inaugural run at Western States.

“A horse was dying in the river. It was that kind of day [at WS100]. It was 107 degrees and I just suffered tremendously. I was so overheated, I couldn’t focus on the road. Umstead was kind of like that. I was weaving off the trail.”

For the final miles of Umstead, Tischer procured staffs from the woods to help Ainsleigh with the climbs. “He was so in touch with what I needed,” says Ainsleigh of Tischer. “Feeding me with his hands—I put away all my pride, honest to Pete. I had to say, ‘Help me,’ ‘Feed me,’ ‘Push me back into the road.’”

Finally, with one mile left and Ainsleigh still asking how much time remained, Tischer told him he had eighty minutes. Eighty minutes to go one mile. “He just sat down,” Tischer says. “He knew he had done it.”

With Tischer by his side and two large walking sticks, Ainsleigh finished with 55 minutes to spare.

The two are headed to Western States in June, Tischer having agreed to crew Ainsleigh once again. “I’m really hoping we can get him to the finish,” says Tischer. “I truly think we can.”

And the fact that he is a predator and filthy old man seems to be ok with everyone in the running community?

That’s quite a big accusation to make KD, do you have anything to link to, to back that up (google is not showing anything)? I suspect that like me, the running community is largely unaware, not condoning (if the accusations are true, of course).

It’s pretty common knowledge among female trail runners. There are innumerable threads about him in several women’s only facebook groups. Some have reported to RD’s, but everyone turns a blind eye because of who he is.

Wow. Then those RDs should be publically called out on it too. There’s no place for this in our community.